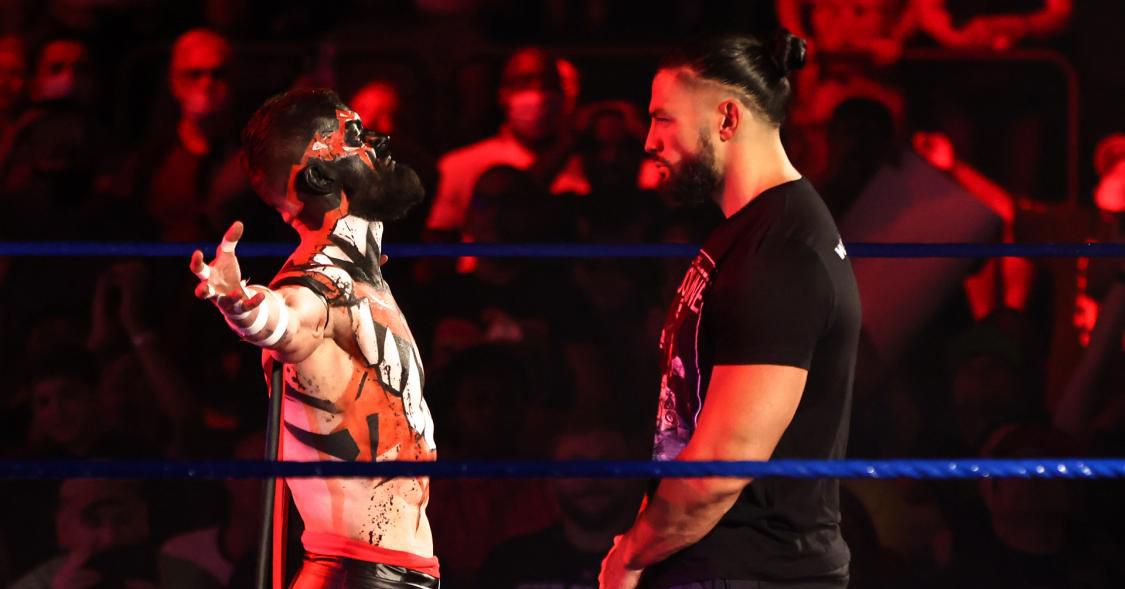 WWE Smack down returns to our lives tonight (September 17, 2021) with a show emanating from the Thompson-Boling Arena in Knoxville, Tennessee, featuring all of the latest releases from the upcoming Extreme rules pay-per-view (PPV) slated for later this month.

Nothing is announced for the show at the time of this writing. Last week’s episode ended with Finn Balor’s demonic form returning, so we should get a sense of Roman Reigns’ concern about his Universal Championship match against The Demon at Extreme rules. On top of that, it should be interesting to see how Seth Rollins has changed after going to the Darkest Places last week in his match against Edge.

Check back here at 8 p.m. ET when the Smack down the live blog starts once the show begins on FOX. It will be below that line here. (REMINDER: NO GIFS OR PHOTOS ARE ALLOWED IN THE COMMENTS SECTION. OFFENDERS WILL BE PROHIBITED.)

WWE SMACK DOWN RESULTS AND LIVE BLOG FOR SEPT. 17

Come and get me out of the state I am in, the glasses I drank do not live up to the truth. The crowd here put their teeth on us, but the cure is more dangerous than the venom, so we leave it in, and I’m blogging this pro wrestling show live for you guys.

The show opens with a recap of Seth Rollins beating Edge last week.

Roman Reigns makes his entrance, flanked by Paul Heyman and Usos as usual.

We get a recap of Brock Lesnar berating Paul Heyman and getting attacked by the Bloodline last week.

Reigns takes the mic and demands that Knoxville recognize him, then asks Heyman to explain to the crowd how to recognize him, which he does. He asks why Finn Balor has to bring out the demon if he doesn’t fear Roman, and says that he has known Lesnar intimately professionally for twenty years and that he has never seen the fear in his eyes, either. WWE, neither in the UFC, nor on the operating table … until last week at Madison Square Garden.

All-new WWE Champion Big E makes his debut and “You deserve it!” Chants rule over him, because he absolutely does. They line up and …

Enter Finn Balor, to send us to break up.

Back from the publicity, match in progress, Balor scores E but Jimmy runs away and scores Jey. Big nails him with a back elbow and drags him out of the ring and to the apron for the big splash! But the Usos turn the situation around and start working at length on E. Balor arrives, Jey pulls him to the ground and Jimmy dives on him as we’re going to crash!

Back from the commercial, Jimmy types a Blu-Ray on Balor and goes on with a reverse chin bar! Out of there, a punch and a kick from Pelé and the way is clear! Hot tags, E in like a house on fire (hey, remember those videos Sean made back then?), Throwing the suplexes belly to belly but Jey hits a Samoan drop! Big with the local Rock Bottom, lariat and a big splash at Jimmy and he throws him out of the ring!

Uso from the top, no one at home but he corrects the course with a superkick for a two count on the WWE Champion! Balor in it, the match breaks down, the stereo ends …

Behind the scenes, Roman Reigns simmers and asks Paul Heyman if he wants to tell him something.

Heyman says no, Roman asks again, and a third time, this time changing tactics and telling him to pretend he already knows this thing and repeat it to him. Paul says he knows where he’s going with this, but he didn’t know Brock Lesnar would be coming to SummerSlam. He reiterates that Brock is afraid of him.

Reigns asks if Lesnar is going to show up to Extreme Rules, Paul says no, and Roman asks how he knows. Heyman says he feels like Brock is afraid of him and won’t show up, and Reigns says he doesn’t pay him for prints, he pays him to know up front.

Circling, Dolph Ziggler performing interference and allowing Roode to take over and get Boogs to work in the corner. Inverted whip, corner kick, plunging blockbuster of Robert à deux! Rick with the firefighter’s carry, crouch in a Samoan drop followed by a belly-to-belly suplex and a blaster! Local lariat, running bulldog!

Rick Boogs wins by pinfall with the Boogs Cruise.