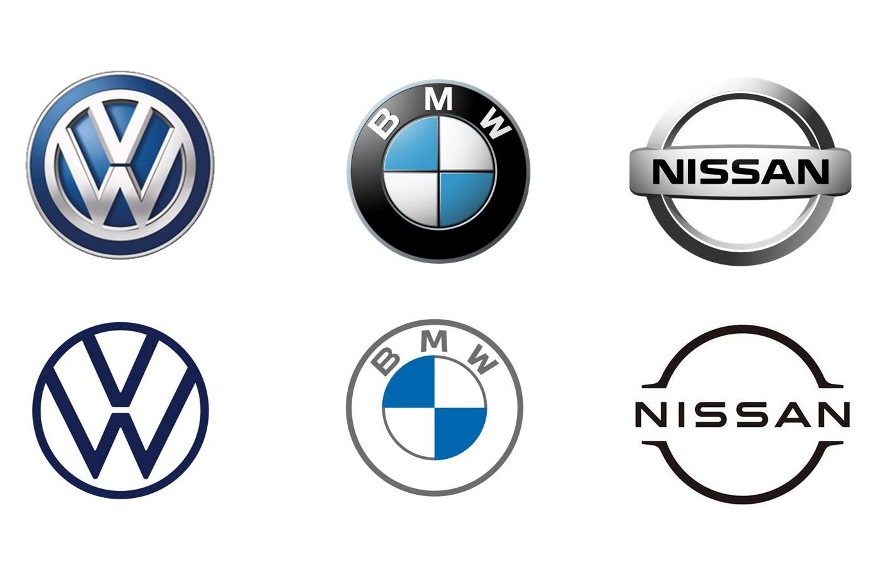 Minimalism is all the rage these days, and I personally love it, but the recent wave of new car logos has made me wonder, does minimalism work on corporate logos or have -they have been poorly executed so far, or maybe I’m missing something entirely.

Volkswagen, BMW, and now Nissan too, have all unveiled new and updated logos; and there is a clear common theme among all – a reduction in the number of elements and a loss of the 3D effect, with a shift to flat or 2D illustrations. Take the Volkswagen logo, finished 3D rendering, and the outer circle that housed the VW cockade is gone. The BMW badge is now also in 2D and has lost the black circle. With absolutely nothing out of place, it is now transparent. As for Nissan, the Japanese firm also took back the iron to its logo, and at the same time also got rid of the rectangle which housed the Nissan lettering. In its place? Nothing. It too is now transparent.

Now, before I sound summarily dismissive about this, let me say that I recognize the fact that there is a lot of thought, and science too, behind logo design; but like everything else, it sometimes gets too deep and too complicated for its own good. Reading the accompanying press releases, you can see a lot of writing about thought and execution, but it’s heavy with fancy swear words and all very abstract.

BMW and VW highlight some underlying communications they say they have with their new logos. BMW says the transparency of the logo is “an invitation” for customers to join the BMW world, while VW says its new “clearer” logo represents Volkswagen’s new motto “no filter”. Of course, in a way I can see it, but it’s pretty abstract.

Also, the two German brands claim that their new logos are easier to use on all media and cite, in particular, the digital world. And I agree here, simpler logos with fewer elements look a lot better than more complex ones; especially on small screens which, today and in the future, also include smartwatches.

For the sake of simplicity, the brands have also both referred to a stripping and reducing approach to designing their new logos. However, while trying to follow the line of minimalism, I think the new designs have strayed a bit into oblivion. We miss them too easily. Just head over to the Volkswagen website to see what I mean.

What’s more, what’s missing is the excitement factor. I remember when I was a kid I would cut out pictures of cars and even logos from the few newspapers and magazines I could get my hands on; that was in the early 1980s, when we didn’t have the internet or as much access to content as we do today. A black and white photo was a nice keepsake, a color photo was a bonus, and getting something like a pencil, cap, or keychain with a car manufacturer logo on it? Man, it was like finding the holy grail!

Logos are meant to do just that. On their own, without the product, logos create excitement and help build a brand; they are what people collect and want to adorn on their caps, t-shirts, pencils, etc. These new logos, I’m not sure they evoke the same kind of emotion. They are too simple and, what is even more damaging, too easily visually lost. But hey, I might be wrong, or just the wrong age group. Perhaps these designs appeal to young millennials. Time will tell, that’s for sure. Until then, tell me what you think? I would love to hear from you on these new models.