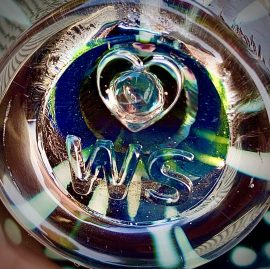 As a member of West Seattle Best Seattle effort related to the imminent reopening of the West Seattle Bridge, a treasure hunt is about to be launched. Here is the announcement we just received:

For the first time ever, the West Seattle community will participate in what we call the Great West Seattle Float Hunt! Burning furnaces of Avalon Glassworks were born unique glass floats, each emblazoned with the spirit of West Seattle. Starting today and until they are all found, these prized floats will be hidden all around West Seattle in retail stores and public spaces, secured with nets and accompanied by an instruction card. Although only one per family is allowed, these floats are worth far beyond their monetary cost, as they are each singular in nature and represent the beauty of West Seattle.

Organizers say they will give clues on line.

ADDED: Commentator M asked about the size of the floats. This is part of the descriptive information that has just been released by Shannon Felix Avalon Glassworks:

Hand blown by Avalon Glassworks, the West Seattle Float is a decorative glass sphere inspired by a vintage fishing float that was once used to float a net. This sturdy bullet is sealed with a Heart ❤️ WS commemorative stop button. The design of this glass float is inspired by the west coast of Seattle. Primarily blue, the ball has white flecks creating a rocky beach foreground with ocean waves beyond. A band of transparent aqua blue represents the sky, against which shimmering blue aventurine glass shines like stars. This contemplation ball is suitable for indoor or outdoor decoration and will float in a water feature, if desired. The West Seattle Float measures approximately 4.25″ in diameter.