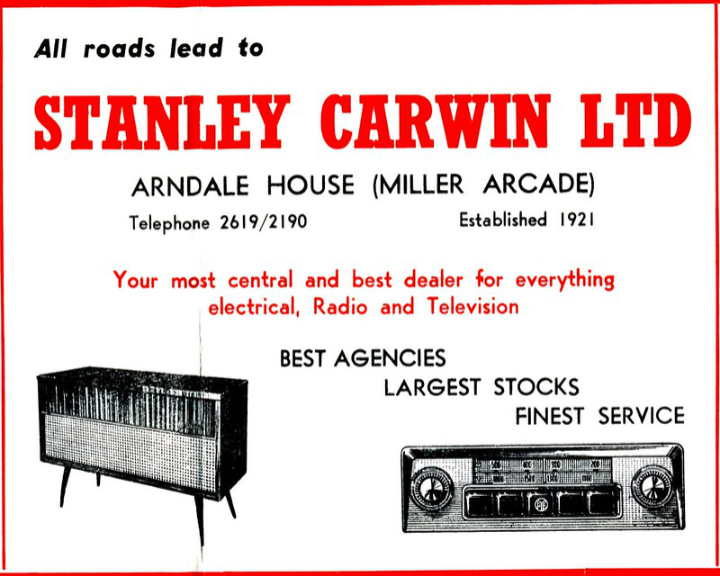 Commercialization was in full swing by the 1890s and Preston enjoyed a wide range of entertainment venues and vendors. Everything from pianos to the Rediffusion radio service were available in the 1950s. Commercial advertisements were featured in local newspapers and magazines and can be used to trace the history of local entertainment in the early 20e century.

In Edwardian times, most middle-class homes had a piano. Seed’s Music Warehouse was located in Church Street and sold organs and harmoniums as well as pianos. Later, this storefront became two separate stores. In the 1940s it was the shop of William Henry (WH) Bulmer, Carver, Gilder, Art Dealer and Picture Frame Maker.

The gramophones take over

Time passed and gramophones began to replace the piano as home entertainment. The “instruments” were reassembled by hand, as most houses still had no electricity. The horn was mechanically coupled to the big mic and the volume was controlled by inserting “material” into the horn – hence the phrase “putting a sock in it”.

George Devey in Friargate sold cameras as well as gramophones. Maybe a first mixed media store? The Decca Dulcephone was a portable wind-up gramophone that was first introduced in 1914. More on Decca later.

By the late 1950s radiographs were all the rage, most still used valves and were mono. Stereo discs first appeared in 1958. At the time, two versions of the same disc were released; one in mono and one in stereo. Decca pioneered stereo in the UK and various introductory records were released.

Another thing to come was the state-of-the-art push-button car stereo. In those days, you were lucky to have a radiator, so car audio was all the rage.

Cable entertainment has arrived in Preston sooner than you think. In 1952, you could get four Rediffusion cable channels. It cost 2/3 per week and you could receive BBC stations as well as Radio Luxembourg without the famous fading.

Associated Rediffusion later became known for television hire and held the ITV broadcast license for London from 1955. Preston was served by Manchester-based Granada TV. ITV started in 1955 as the first channel to broadcast commercials in the UK.