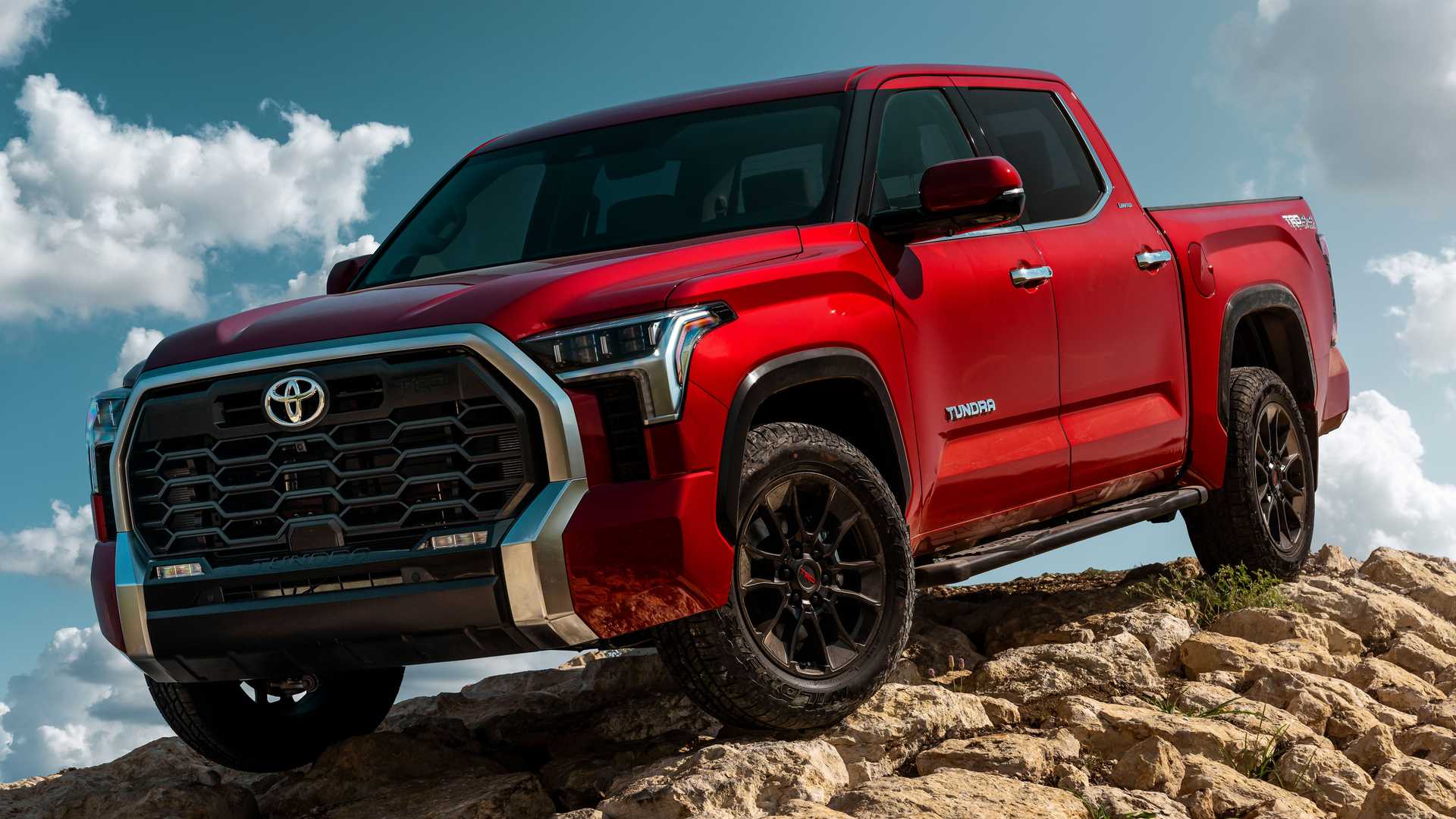 Toyota Global launched the all-new 3rd generation Toyota Tundra. This one is faster, bigger and more efficient than the the last generation. Everything is BIG in Texas. Full-size truck is left-hand drive only / North America exclusive and assembled market Toyota engine manufacturing, Texas.

Variants of the new Toyota Tundra

The company offers six variants; SR, SR5, LIMITED, PLATINUM, 1794 and Top of the range TRD-PRO. The price of the new truck is unknown, but the previous generation starts @ approximately $ 35,000. Expect the new one to start at roughly the same price and be able to reach / cross $ 60,000 for the loaded variant.

Some of the main rivals are Chevy Silverado, Dodge RAM, Nissan Titan, GMC Sierra, and the world’s best-selling Ford F-Series.

The V8 is dead. The pick-up is available with a 3.5L twin-turbo V6 pumping 389HP and 649NM of torque. The second engine is 3.5LV6 Twin Turbo Hybrid make a torque of 437HP and 790NM. 10-speed automatic transmission is standard on both engines. Hybrid gets an electric motor coupled between the engine and transmission.

Meanwhile, the the previous generation Tundra with a 5.7L naturally aspirated V8 produced 381 HP and 544 NM of torque. The new smaller displacement turbocharged engine produces more power and torque, as well as being more fuel efficient.

The truck is available in Double cabin and Crew-Max configuration. Depending on the body style, a 5.5, 6.5 or 8.1 foot long bed will be available. The truck has a Payload capacity from 880kgs [ increase of 11% over last gen] while it can tow a 5.4 ton trailer [ increase of 17.6% over the last generation].

The new model is based on Toyota’s new global architecture and more specifically the GA-F platform, which is designed for the bodywork of chassis SUVs and pickup trucks. The pickup shares its foundation with the new Land Cruiser LC300. Tundra’s hybrid powertrain means we’ll also see a turbo hybrid V6 on the Land Cruiser during its lifecycle.

In addition, the new truck comes with new sharp style, making it more muscular and conventional. The biggest change is a massive grille which is visually linked to the ground via a C-shaped radiator hull, with a blackout panel on the bumper gives the truck a gaping mouth.

Then comes the chiseled wheel arches making the side profile rather interesting. The new integrated rear bumper digs the deepest traditional separate steel unit. The company wanted to give the new Tundra a pinch of modernity with blackened A and B pillars, giving greenhouse a canopy look and highlight its large windows. As before, the new Tundra offers a rear window that falls into the bulkhead.

The first thing to hire is an awesome low dashboard that surprisingly offers several tech features. The truck has a 8 inch infotainment touchscreen, while high-end models will get a 14 inch touchscreen mounted high on the dashboard. The new vehicle finally gives up Toyota’s awful infotainment software replace it with a new, more responsive and efficient technological suite.

Apple CarPlay and Android Auto are standard in all variants, while additional features such as Amazon Music and Apple podcasts will also be available. The whole interior gives a clean and chic look with a thick metal trim supported by HVAC vents. There are ample space in the first row with a depth Central console providing space for purse, laptop and other daily accessories. Then comes the side by side cup holders and a vertical loader.

However, the situation for rear passengers is not so good with less free space in the back, mainly due to a optional sunroof, while the legroom looks excellent all around.