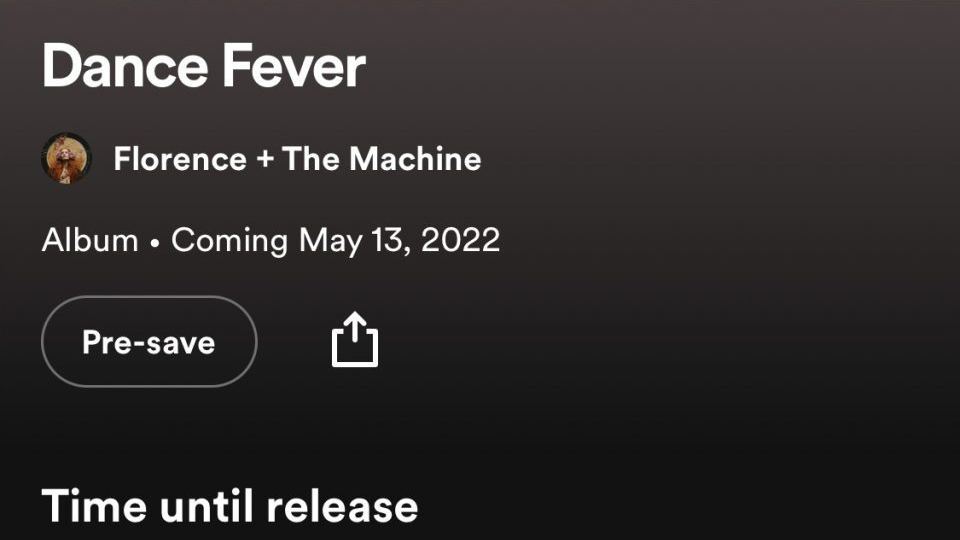 First introduced on Spotify in 2016, pre-saves are the streaming equivalent of pre-ordering an album or single. Pre-saving a release ensures that it will be automatically saved to the fan library on release day, and an alert will be sent to the user. For artists, it shows streaming services how popular a release is before release and increases engagement from day one, both great metrics for getting pushed on the platform, like on playlists. That’s why you’ll often see artists pushing pre-saves so much until release day.

Before Florence + The Machine’s new album, pre-saves took place outside of the Spotify app itself, forcing artists to use a third-party service. The screenshot below shows an upcoming release on the artist profile. The publishing page displays a Pre-register button, along with album art, release date, countdown timer, share icon, short videos via Spotify Clips, and a track list preview, with those previously released tracks playable.

This update is currently iOS only and only on dance fever. We hope the feature will expand to all artists and platforms, including Android and desktop.

Among other free marketing features, our friends at PUSH.fm allow artists to create a Pre-register landing page, containing Spotify, Apple Music and Deezer pre-register/pre-add links. While it looks like Spotify may soon allow artists to set up pre-saves on the platform, PUSH.fm will remain a favorite for artists looking to bring all three streaming services together on one page, while providing artists detailed statistics.