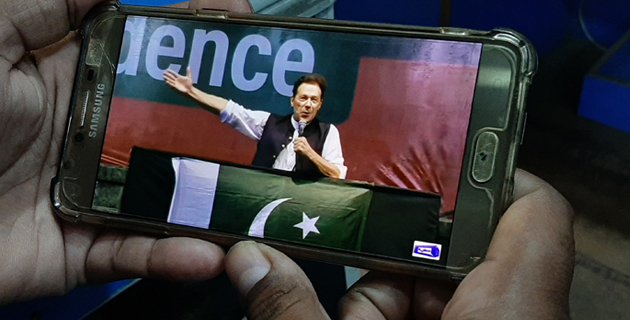 For more than a decade now, we have been experiencing a revolution in social media. It was a complete game-changer, allowing politicians of all schools of thought to deliver their message and run their political campaigns to build a narrative of their constituents and the general public against their opponents. Most political parties and politicians in Pakistan have individually embraced social media, especially Facebook and Twitter, to deliver their message to their constituents without media filtering. Political parties and individuals enjoy widespread support using social media platforms. We can see from elections around the world that social media is leveling the playing field in politics, where access to official communication channels and financial resources are major hurdles for politicians.

If we examine the history of social media, we will find that grassroots movements in the Middle East known as the Arab Spring, from the Syrian Civil War to the so-called extremist organization, the rise and fall of the Islamic State, from allegations of Russian interference in US elections to the Cambridge Analytica scandal, from PTI sit-ins against the government, from TLP protests to long marches, we only learned of major events through the through social media.

Today’s political campaigns are not just limited to posters and banners; they are also full of infomercials, advertisements, blog entries, thousands of tweets, Instagram posts, and Facebook posts. Politicians can conduct their campaigns by viewing responses to their actions on social media platforms.

Social media clearly has a bigger impact on election results over time, as political campaigns have become more expensive and the need to reach out to voters has become more vital. Over the past five years, social media has assumed a greater role in society.

The impact of social media was first seen in the 2018 general election, in which former cricketer turned politician Imran Khan, Pakistan Tehreek-e-Insaf (PTI) emerged victorious. The PTI, and in particular Imran Khan, have changed the politics of the country with social media.

Knowing the importance and value of social media, Imran Khan not only ensured his party’s presence on social media platforms but also used it to build a narrative and woo the public, especially the younger generation. Since the foundation of the PTI more than 26 years ago, its President, Imran Khan, who was already a celebrity known and praised by all, especially by the younger generation, who admire him, love him and consider him the last hope for the survival of the country.

The cricketer-turned-politician used social media to build a narrative and get his message across to the general public and his supporters, who he called the “Tigers”. The PTI’s social media campaign gathered pace ahead of the 2018 general election in which the Imran Khan-led PTI emerged victorious, giving the former captain of the Pakistani cricket team the opportunity to stand and change the destiny of the country. What the Imran Khan-led government did during its roughly 3½-year tenure is a separate discussion, but the party has always maintained its social media presence to share its performance throughout its tenure.

Over the past few months, or we can say since the overthrow of the PTI government, the party has been campaigning rigorously on social media to build its narrative and to some extent the party has been successful in its campaign. The result of which was visible in the by-elections held in 20 constituencies in Punjab after members of the provincial assembly were overthrown by the ECP on the order of the Supreme Court after voting for Hamza, the leader of the Muslim League of Pakistan-Nawaz (PML-N). Shehbaz during the election for the post of Chief Minister of Punjab.
However, apart from the benefits of using social media, one cannot ignore the major problem of misinformation or fake news through these media, as these propaganda-driven campaigns are mushrooming due to the growing role social media platforms as media, where content can be produced and relayed among users without significant third-party filtering, fact-checking or editorial judgment.

Fake news or disinformation finds fertile ground in a divided electorate that has clear internal and external groups, where people are willing to accept any statement as long as it is consistent with what they already believe. This recent change in political dynamics has placed an additional obligation on the youth of a country considered the fifth largest young nation in the world, comprising 63% of the total population, as social media platforms have gained “knowledge power”. derived from the vast amounts of data they collected and collated. These platforms know more about a person than the government, which means their opinion, thought and support for all purposes could easily be manipulated. Young people should think that they are the kingmakers now, and they should learn the algorithms and working mechanisms of social media platforms to differentiate between true and false stories to save the fate of the country.

The views and opinions expressed in this blog belong solely to the author and do not reflect the official policy of Dunya News.