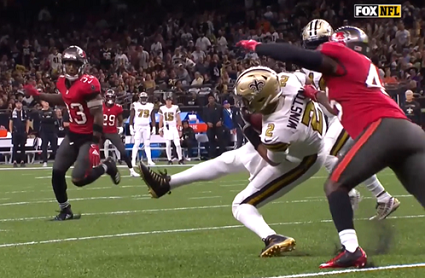 The Slimy Saints are the only legitimate threat to the Bucs defending their NFC South crown, so Joe was paying attention to the New Orleans draft.

First, New Orleans did not draft a quarterback, which many thought would consider trading for an additional first-round pick. They seem happy with Jameis Winston who just had major knee surgery (ACL) in December and Taysom Hill who is also suffering from a serious injury. Good luck with that, guys.

So what did the Saints do? Their five picks are below:

Round 1, Pick 11: Wide receiver Chris Olave, Ohio State – An absolute beast of talent, and he could potentially have one hell of a season if Michael Thomas actually returns – and gets back into shape.

Round 1, Pick 19: Left tackle Trevor Penning, Northern Iowa – Good pick, but unlikely to be a 2022 upgrade from Terron Armstread, who signed a big contract with Miami. How fun would it be to see Jameis deal with a leaky rookie tackle?

Round 2, Pick 49: Cornerback Alontae Taylor, Tennessee – The eighth drafted cornerback is a ballhawk, but does not seem to have instant potential.

Round 5, Pick 161: Linebacker D’Marco Jackson, Appalachian State – Looks like another special teams ace for one of the NFL’s top special teams is uniting.

Joe doesn’t think the Saints have closed the gap on the Bucs this offseason. Joe will also note that the Saints haven’t drafted a running back, which could mean they aren’t concerned about Alvin Kamara being suspended this season after he was arrested by battery in February.