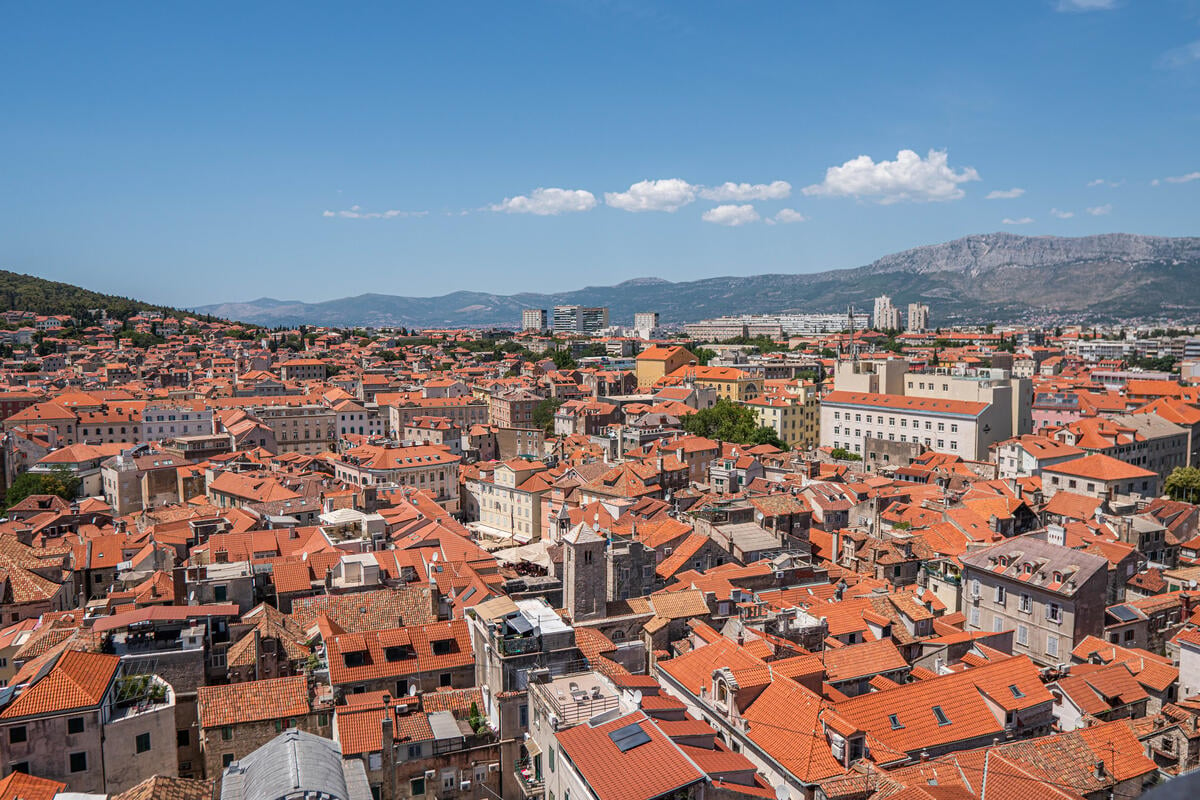 Our last port of call brought us to Split, Croatia. The past week has gone by too quickly, and it was bittersweet to step off the ship this morning knowing that we were visiting the last of the five beautiful ports on this itinerary!

Split is Croatia’s second largest city and a popular beach destination for Croatians and international tourists.

Split is the first port we’ve had this week where you can get off the ship and into town without a tender or a bus ride. It was a nice change of pace to be able to disembark at our own pace and quickly get to town without wasting time waiting. 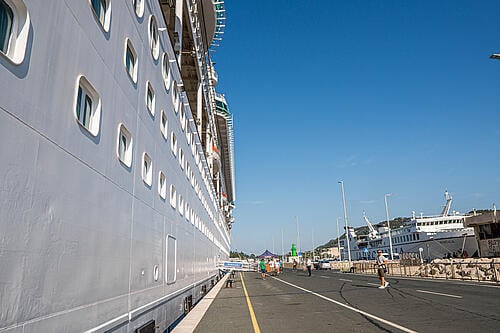 It was a ten minute walk from the city harbour, where we walked through the city walls to the old town. Like yesterday in Kotor, it was as if we had entered medieval times.

Our first look at Split was the central square of Diocletian’s Palace, an ancient palace built in the 4th century. The palace was built to be both a Roman military camp and a place for Diocletian, a Roman emperor, to spend his retirement. 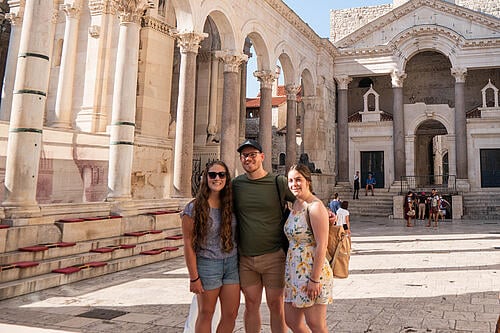 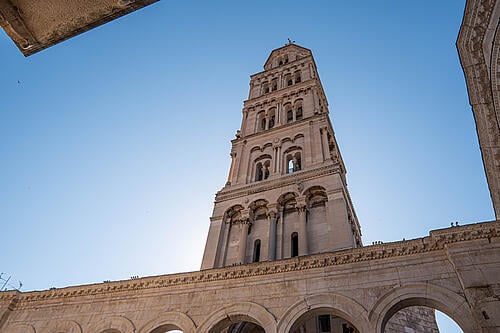 We spent time navigating the narrow streets of Split and soaking up the history of the city. I was fascinated by the old city walls, where the old part of Split met the new. 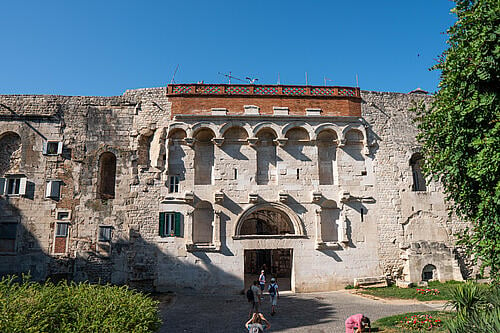 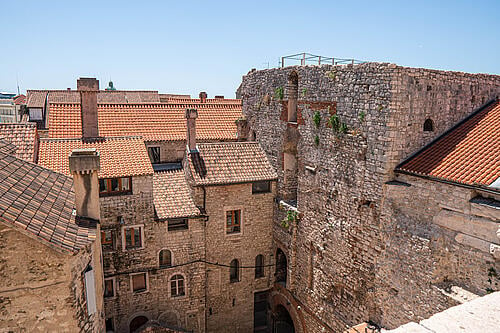 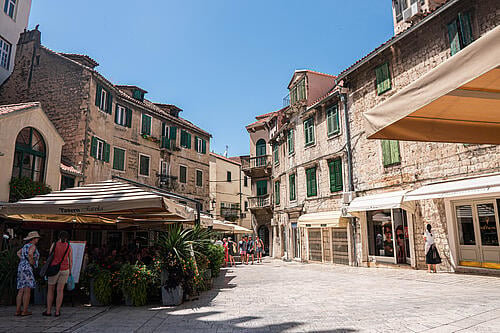 Interestingly, many exterior shots of the Game of Thrones series were filmed in Split. It’s easy to see why they chose Split as the filming location, as parts of the city really make you feel like you’ve traveled back in time.

A Game of Thrones museum and souvenir shop is also located in town, which could be a fun activity for big fans of the series! 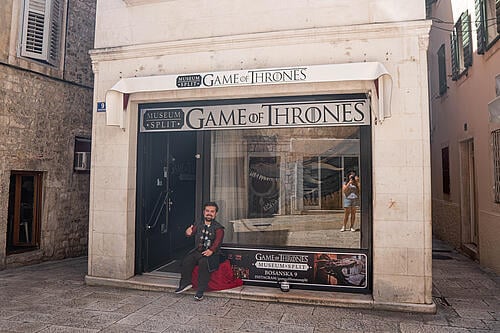 Afternoon at the beach

The temperature today was an unpleasantly toasty 96 degrees, so we didn’t have the best conditions for walking around town all day.

Instead of roasting in the heat, we decided to visit a nearby beach in the afternoon to cool off.

Split is known to be a resort town with many beaches, so I was curious to see what all the fuss was about. We opted for Kasjuni beach, located 15 minutes from Split. 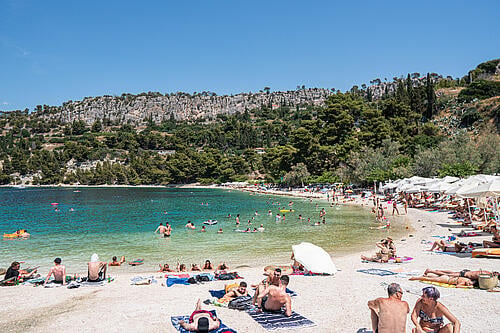 For some reason my phone service wasn’t working this morning in Croatia so I couldn’t order an Uber to the beach. Instead, we took a taxi near the entrance to Split’s Old Town. The taxi was metered, but at around $30 for a 15 minute ride to the beach, that seemed pretty steep.

Kasjuni Beach is located in a small cove, so the water is calm, clear and refreshing. Greenery and hills line one side of the beach, while the other faces the open Adriatic. 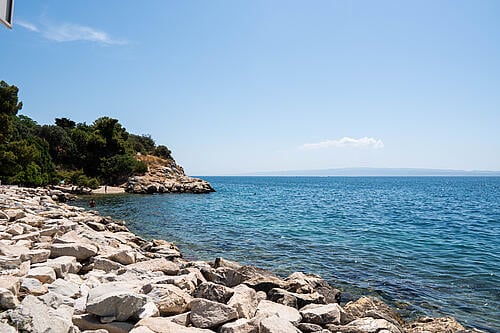 We forgot to bring pool towels with us this morning (a rookie mistake!) so we decided to rent beach chairs to use for the day. A beach club operates on Kasjuni Beach and offers sun lounger and deck chair rentals. A restaurant and a bar are also available, as well as changing rooms and toilets.

We stayed at the beach for about two and a half hours, where we cooled off in the sea, relaxed on our beach chairs and enjoyed a lunch we prepared at a bakery in Split. 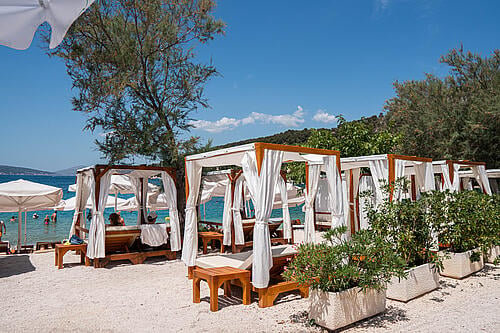 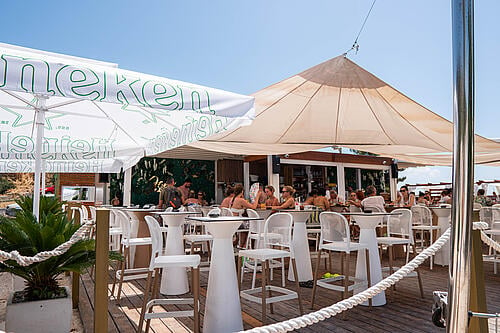 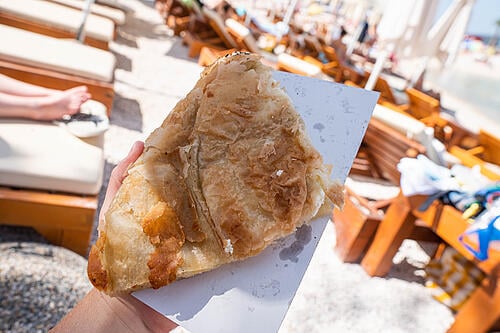 Luckily, my phone service started working later that day, so we were able to get Uber back into town for about $8 (over $20 cheaper than a cab!).

While the beach was really nice, we wanted to go back to Split to explore the old town more. After all, we can find beaches all over the world, but we would only have a few more hours to explore Croatia! 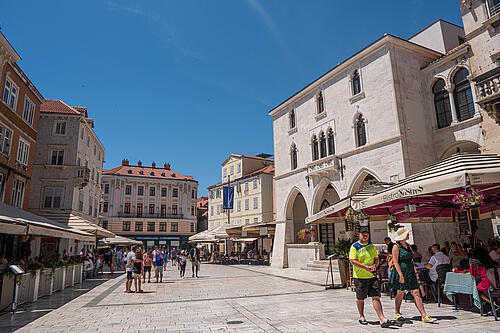 We did some souvenir shopping in the city and tasted delicious ice cream. In these historic towns, it’s just as fun to wander around without a map as it is to plan a full day of sightseeing! 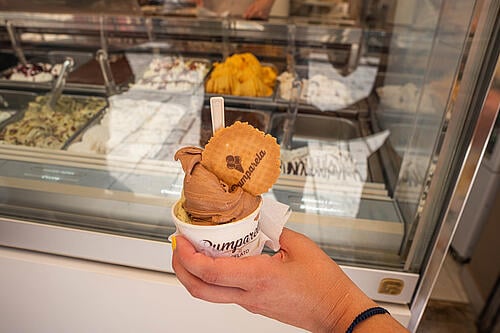 Our last stop of the day was a climb of the bell tower of Diocletian’s Palace, which stands over 180 feet in the air and offers panoramic views of Split. We bought tickets for the steeple for $6 each and started the climb. Extremely steep stone stairs at the start of the tower turned into metal stairs a few flights up, much easier to climb. 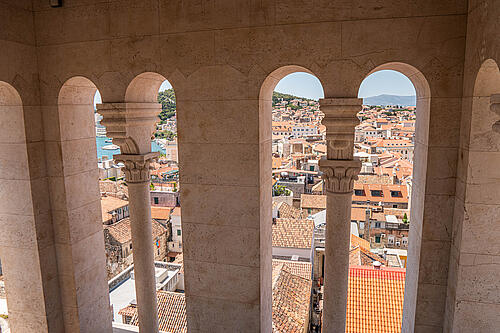 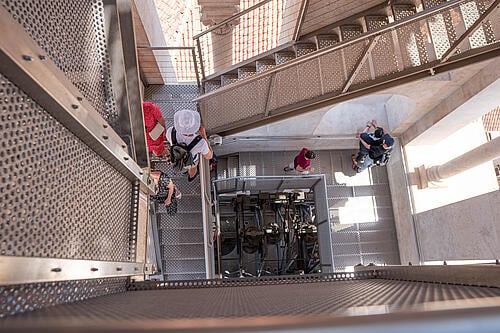 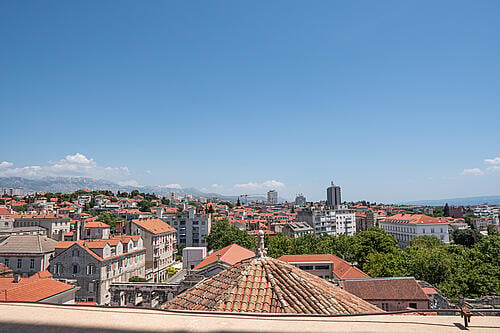 The view from the top was spectacular, offering views of Split, the port, the Adriatic, and the surrounding mountains. 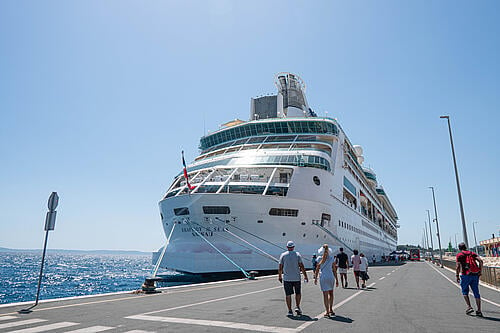 Our day in port in Split was short today, with everyone on board at 4pm. Once back on board, I spent a few hours working on content for the Royal Caribbean blog in the Centrum. With views of Croatia and the Adriatic as we left Split, it was as good as an “office” can get! 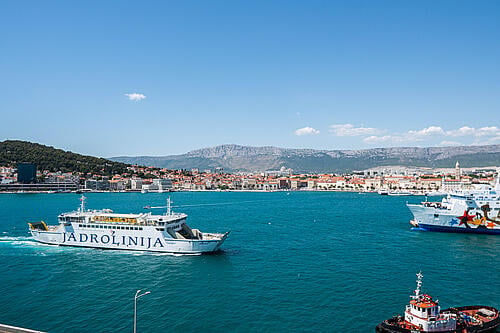 We still had about $100 onboard credit to spend, so we made a reservation at Izumi for dinner tonight. There is no hibachi option on Rhapsody of the Seas so we enjoyed the udon noodle dishes, ramen, fried rice and potstickers! 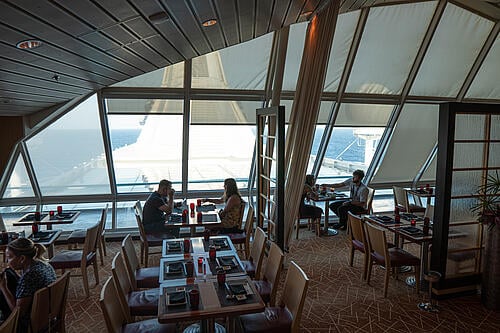 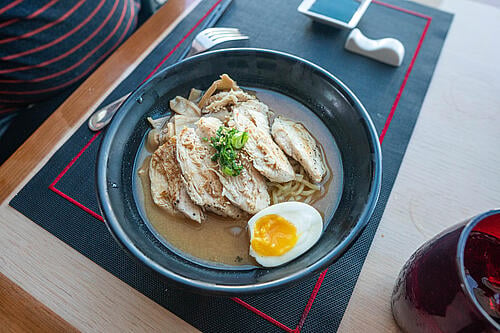 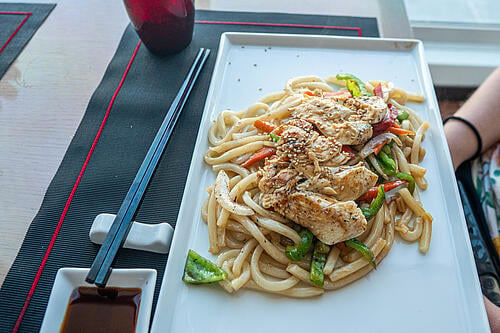 Everything was delicious as usual, and a meal at Izumi isn’t complete until you have mochi ice cream and crispy red bean sesame balls. 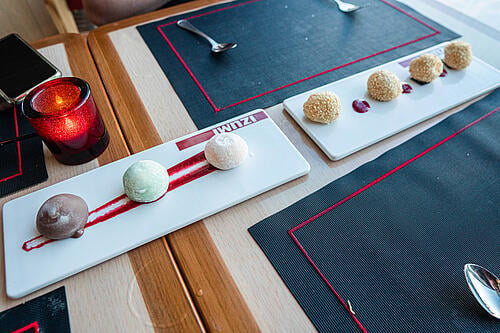 We ended our night with a beautiful sunset on the pool deck before returning to our cabins to (unfortunately) pack our bags.

I think this has been the best cruise itinerary I have ever done (although it may be Alaska related). It was very harbor so I wouldn’t say it was the most relaxing cruise, but the early mornings and the thousands of steps in the harbor were worth it. 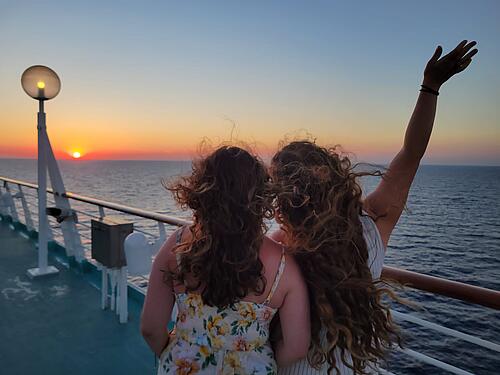 I’m sad to see this cruise come to an end, but I’m super happy to have been able to share this experience with my brothers and sisters. The good news? Our cruise ends tomorrow in Italy, which makes it a good excuse to continue exploring Europe!

Thanks for following my blog live! We’ll be back with more live blogging from Matt about Mariner of the Seas on the Royal Caribbean Blog Group Cruise later this month.