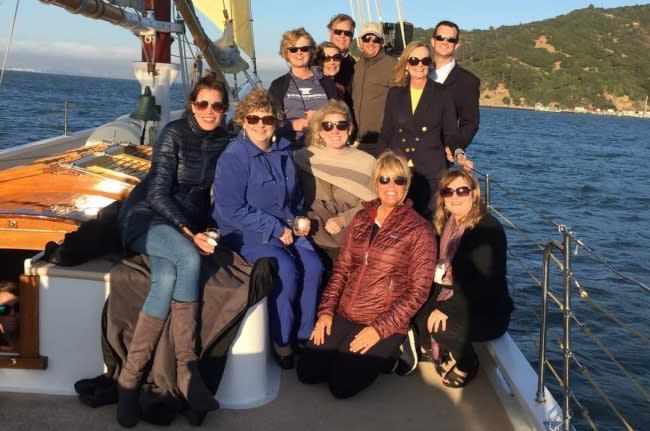 By: John A. Lanier

I have a parable for you this week. Three wealthy friends (let’s call them Alex, Billie and Casey) were having dinner one night. Alex asked the others, “What is one life experience you still want to have?” Billie thought for a moment, then replied, “I’d like to sail around the world.” Casey replied enthusiastically, “Me too!” Alex, the group’s competitor, then suggested, “Why don’t we make it a race?”

A race on the high seas

So they all agreed to rent sailboats and crews capable of taking them around the world. After several weeks of preparations, they had each made the necessary arrangements. The boats were beautiful and well equipped, and each crew was seasoned on the seas. Alex, Billie and Casey each boarded their own sailboats, greeted their captains and crews and wished each other luck and bon voyage. Then, with the wave of a flag, the race began.

The first days of sailing were uneventful, with clear weather allowing the boats to have a good time. On the fourth day, however, a storm hit and the captains had to make a decision: ride through the storm to save time or take a longer route around it. It was a race after all, so Alex, Billie and Casey each convinced their captains to pass. As the rain started to fall and the waves got bigger, each of the friends took a different approach on their boats.

Alex stood just behind the captain at the helm, shouting out suggestions and instructions on what they should do and how they should navigate. This drove the captain to frustration and exasperation, and the boat began to fall behind. Meanwhile, Billie descended into the hold of the boat. Billie’s captain asked, “Where are you going?” “I’m stepping away from you, because I’m not helping you under these conditions,” Billie replied. The crew did well during the storm, although they mumbled to each other in frustration at not having everyone on deck.

Casey approached the captain and said, “I’ve spent the last few weeks learning everything I can about sailboats. I may not have much experience, but I’m here to help in any way I can. I’ll wait for your instructions, but don’t hesitate to get to work. The captain nodded gratefully, and with Casey’s help, their boat was able to sail through the storm as quickly as possible.

Ten years of navigation on the high seas

As you may have seen in communications from the Ray C. Anderson Foundation last week, Ray would have turned 88 on July 28th. This day also marked the tenth anniversary of the foundation, as we launched it publicly on Ray’s birthday, approximately one year after his passing. It’s amazing to me that a full decade has passed since that day. Happy birthday to Ray and happy birthday to us!

I wrote this parable in an attempt to explain the philosophy that guided our philanthropy during our first ten years. When we started, we were primarily tuned into the idea of ​​advancing Ray’s legacy. His name was, and still is, so synonymous with environmental sustainability, but he left us with no instructions on what to do with the foundation. Beginning our philanthropic journey was a lot like launching a boat out to sea – we could chart an endless number of courses as we sought to build on what Ray had left us.

Philanthropy, however, is based on partnerships, so it was never a question of which path we would take. It was always about the partners we were going to take it with. What boats would we charter and what would their crews be like? I think that’s an apt analogy for grantmaking, and determining which organizations to fund is the most fundamental and critical question for any philanthropic organization.

Be the best kind of funder

Chartering the boat (ie granting the grant) is only the start of a relationship, however. When you board this sailboat, what type of partner will you be? Well, as I framed my parable, I think we can all agree that Alex is the wrong guy. Unfortunately, the power dynamics in philanthropy can make this a real risk. Donors must have the humility to yield to the expertise of their beneficiaries. They must also trust them to do their job well. If a funder is too forceful or controlling, the relationship will break down and the charity work will suffer.

A better outcome is when funders take Billie’s approach in my parable. Billie gives in to the captain’s expertise and steps aside. Often backers will do the same, writing the checks that make the job possible, then backing out of the relationship. This at least allows recipients to do what they do best. Billie’s approach avoids the real mischief that may come from Alex.

I think there’s an even better approach, and it’s the one Casey typifies. This is the approach we have tried to pursue at the Ray C. Anderson Foundation. Some funders become active and effective partners with their beneficiaries. When this works, the beneficiaries are always the captain and crew of the ship, but the funder lends a helping hand when possible. For this to work though, the funder needs to become a subject matter expert in the charitable field and also bring some kind of valuable skill to the partnership.

I am proud that we have done this in our ten years. We are far from perfect funders and are always striving to improve, but I can honestly say that we are active partners and know a thing or two about environmental issues. Most importantly, we have found some amazing grantee partners over these ten years. I guess you’ll have to ask them, but I think we do a good job of helping them with the job without being overly involved or overbearing.

And as I sit here watching the next decade ahead, I see open seas ahead of me. So much work remains to be done and our race is not yet won. I hope the storms won’t be numerous and that we won’t have to tack too much into the wind. But more than anything, I’m glad this sailing expedition is a team effort, and we look forward to playing our part and sailing as far and as fast as possible!

Ecocentricity Blog: Ridiculous Plastic Recycling Rates and Why We Can’t Ask Consumers to Fix the Problem

Explore additional media and other ESG stories from the Ray C. Anderson Foundation at 3blmedia.com