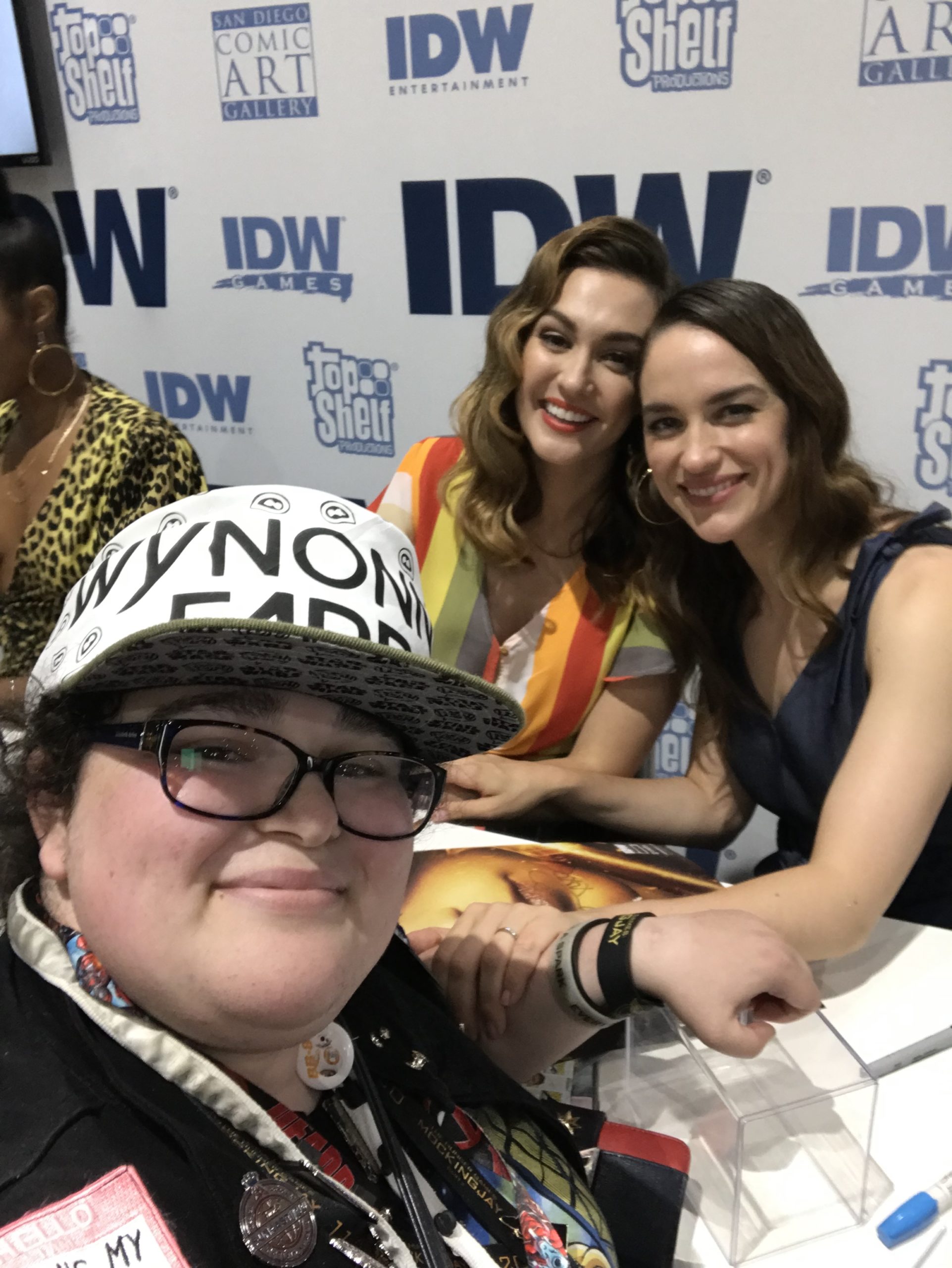 Every week from now until San Diego Comic-Con, we celebrate you: our readers! So let’s meet this week’s contestant of the week:

Where are you traveling from?

How many years have you been dating?

This will be my 7th year

What was your favorite panel and why?

Certainly the Wynonna Earp panel in 2019. I had a blast. I got to ask a question that turned out to be part of the next season’s show. I laughed so much and was grateful to have had a wonderful time.

What is your favorite exhibitor or artist stand and why?

FavoriteeExhibitor is Funko because they always bring great collectible content. I started collecting after I got the SDCC 2016 Funko exclusive Indiana Jones, so the Funko booth is very special. My favorite artist booth is Justin Harder’s CLAUS Studios because they do the best Deadpool prints. He is nice and really takes the time to talk to people who visit his booth.

What is your favorite item that you brought back from the convention (swag, exclusive, merch, etc.)?

Probably the SDCC Funko Booth exclusive LE 1000 Wynonna Earp Funko Pop!. It was the first Pop! of the franchise and it took a lot of work to get it. I had set up a group of lines and lined up for the preview night on Tuesday around 6pm. I was there until I got up at midnight. I went to sleep for a bit. I got a message that they were about to move everyone inside and one of my line group had forgotten their badge. I had to run from Little Italy to the convention center in less than 30 minutes. From about 10:30am to about 6:00pm I waited in line and made some awesome friends who I still talk to. It’s great to connect with other nerds. When the doors opened, I had to run (fast walk of course) to the rapidly growing Funko booth line. I was so nervous it was going to sell out, but I managed to get it. With the amount of work it took to get it, I cherish it so much. This is my favorite piece from my Funko collection.

What was your favorite autograph session and why?

How to choose just one? If I have to choose, it should have been the Wynonna Earp signature in 2019 on the IDW stand. It was my first time meeting the actors and I was so nervous about meeting them. I had managed to grab the SDCC 2019 Funko LE 1K Wynonna Earp exclusive and wanted lead actress Melanie Scrofano to sign it. I spent the night outside for more than 8 hours on the sidewalk so as not to miss having a wristband for the signature. The cast was so sweet. I managed to take a selfie with a few of them and some remembered me from a fuck I attended later that year. It was blurry, but I remember being happy, that’s what it’s all about.

Tell us about your most memorable celebrity encounter?

I’ve had a few, but none where I ran into anyone. However, I have a moment that spans two downsides! I believe the first part started in Glow panel in Ballroom 20 in 2016. I don’t remember what they were talking about, but I do remember they were talking about the musical talents of the cast. I was sleep deprived and excited, so at one point I shouted “FLASH THE MUSICAL”. The following year, the show did a musical episode. During the panel in 2017, I stood up at the microphone and had the opportunity to mention that I had shouted “FLASH THE MUSICAL” the year before and asked what inspired the musical episode. They joked it was me, but that was again because they wanted to explore the musical talent of the cast. The kid behind me asked when the next one would be and one of the cast members said “Every time Lindsey shouts it.” I don’t know if you can consider this a “celebrity encounter”, but I’ll definitely remember it forever.

What is (or was) your favorite off-site and why?

I didn’t do many offsites, but I really enjoyed the hunger games offsite that Lionsgate had at the Hard Rock Hotel a few years ago. They sent us to this all-white room and gave us all-white snacks for free. I got myself some white chocolate covered pretzels. They then seated us in these white pod like chairs and handed us a Samsung tablet and headphones to watch the first full trailer early. Before they started the trailer they sent a peacekeeper (a soldier from The Hunger Games movies) to stand over me and watch me watch the trailer to “make sure I was respecting the president Snow” (the evil president of the film series). It was a very memorable experience.

I mean yeah, as a collector, exclusives are cool and it’s fun to see and meet celebrities, but every year I make new friends and get to hang out with like-minded people the same ideas. The show is chaotic in the best possible way. There is always something to do and you can do it with other nerds. I still have a few people I talk to and some I don’t know. However, I have made great memories with so many other participants over the years that I will cherish forever. One year, someone gave me his lucky ticket that he got by winning the Lego lottery. They had decided they weren’t coming back for the next scam, so they wanted me to have it and hopefully know their luck. The following year I had one of the best counters I ever had at SDCC. I’m not always superstitious, but I have a feeling it has to do with the lucky charm I was given and I will be forever grateful.

What are you most looking forward to seeing/doing/experienced at the convention after three years away?

I’m not sure exactly what booths or actors will be there this year, or a lot offsite, but I’m hoping to reconnect with some people I met on the previous tour and hopefully meet some friends online for the first time. I’m glad to be back in San Diego. It’s such a vibrant city with great food and great weather. I think I’m just excited to be storytelling again and to be with other nerds like me.

Do you want to be presented as our participant of the week? Find out how!