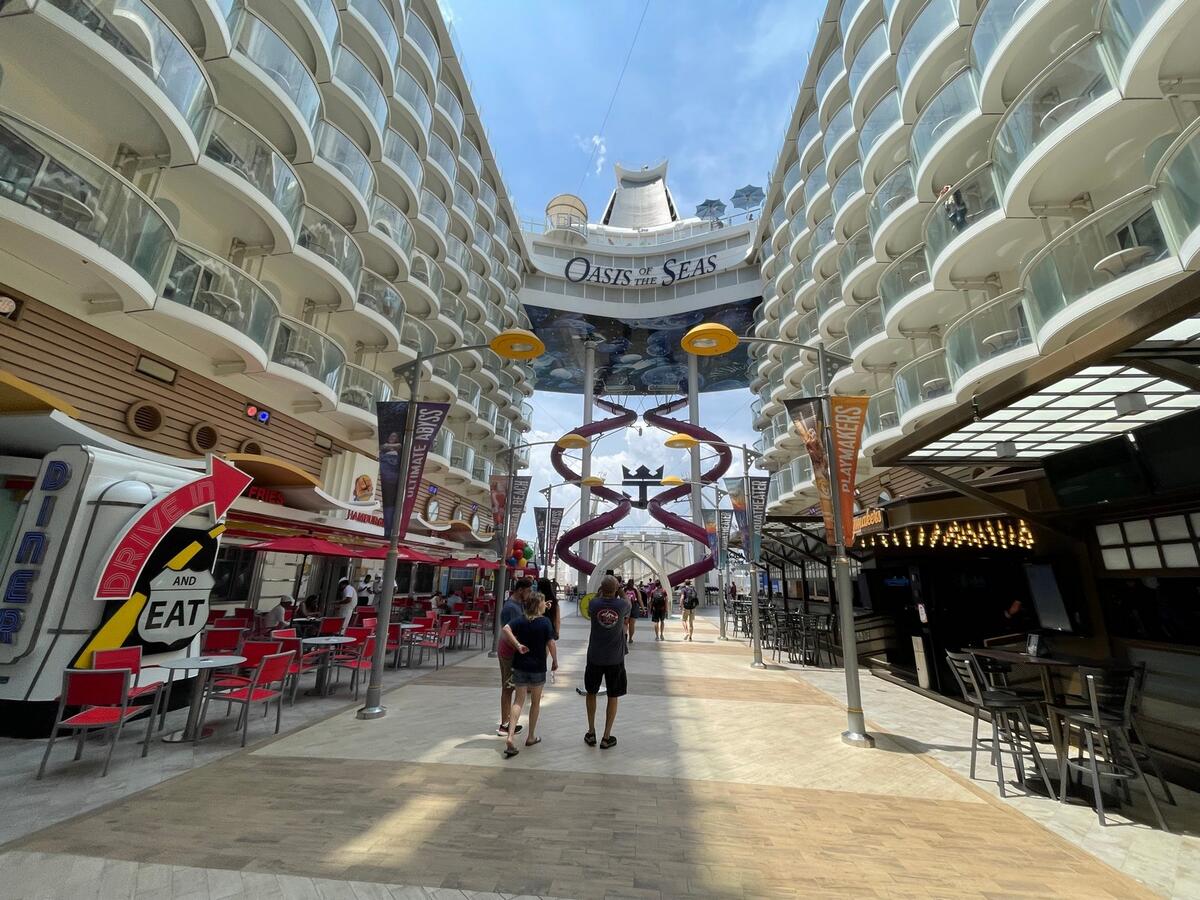 It’s time to board Royal Caribbean’s Oasis of the Seas for a speedy 3-night cruise!

I haven’t been on Oasis of the Seas since late 2019, and when I saw a short cruise deal listed, I decided to book it and enjoy a weekend getaway.

For this cruise, there will only be me and my wife sailing. My parents flew in to stay with the kids, which means 3 nights of cruise fun for me, and 3 nights of my kids seeing all they can get from Grandma spoiling them.

Oasis of the Seas departs from PortMiami, so I came down the day before and stayed at the Hyatt Centric Las Olas hotel in Fort Lauderdale. I stayed in Fort Lauderdale instead of Miami to help break up the ride from Orlando.

The morning of the cruise, we went to Miami. With traffic, Google estimated it would take about 55 minutes.

For this cruise, we have booked a category L1 Crown loft suite. I had originally booked a balcony but then spotted a reasonable price to upgrade to a suite and thought why not give it a try.

Our check-in time was noon, but the email from the concierge a few weeks before the cruise said we could arrive an hour earlier than our check-in time.

Leaving from PortMiami Terminal A, we parked at the garage and were able to check in directly. 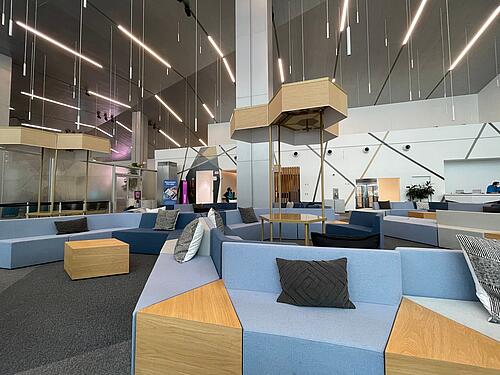 Once on board the ship, our first stop of the day was the Windjammer for lunch. 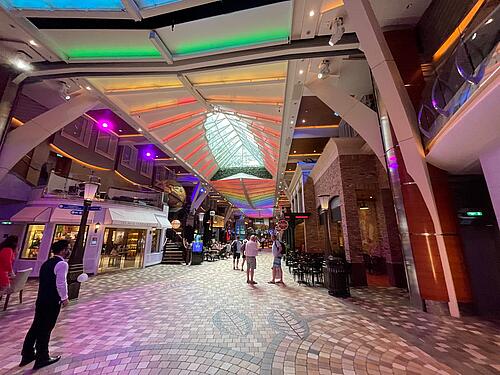 It was our first time in the Windjammer since Royal Caribbean resumed allowing passengers to self-serve, instead of the crew. 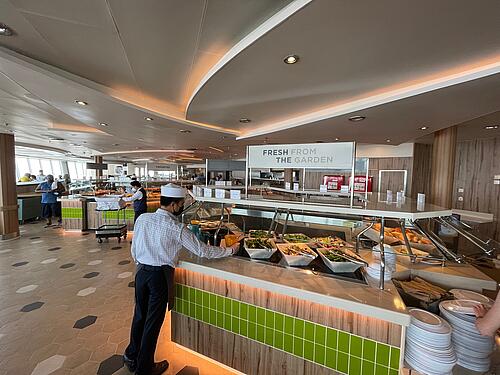 While I preferred crew members to serve guests, serving ourselves is how the Windjammer was every time before the pandemic and I never thought twice about it back then. 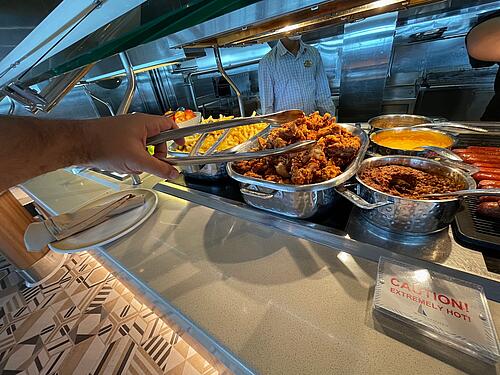 Our next stop was the Suite Lounge to meet the concierge.

Nadia greeted us and helped book all of our shows. Although this is only a 3 night cruise they perform Cats, Aqua80s and Frozen in Time. 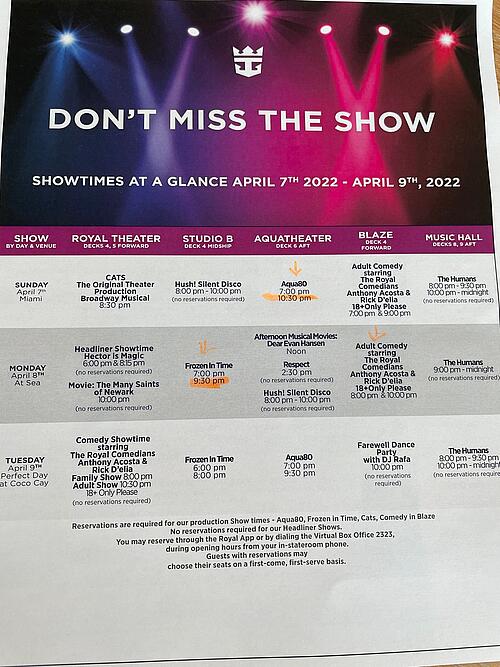 We booked reservations for Aqua80s and Frozen in Time, which the concierge handled for us.

Nadia had pre-cruise specialty dining reservations a few weeks ago when she sent a welcome email. The only restaurant she couldn’t book was Izumi Hibachi, so we stopped there to get a lunch reservation for the second day.

We spent the early afternoon relaxing on the pool deck. It was a hot day, but there was just enough breeze to keep him comfortable. 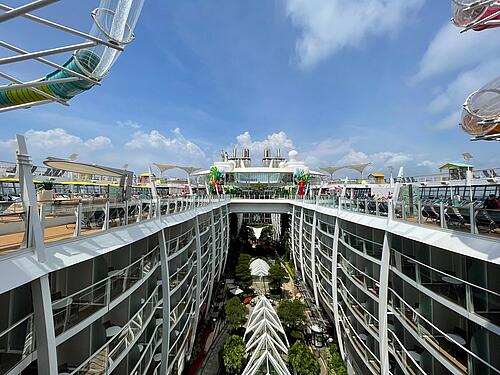 The cabins were ready at 1:30 p.m. so we went to drop off our things and check out the suite.

This is my second time staying in a Crown loft suite, although it was on Harmony of the Seas. 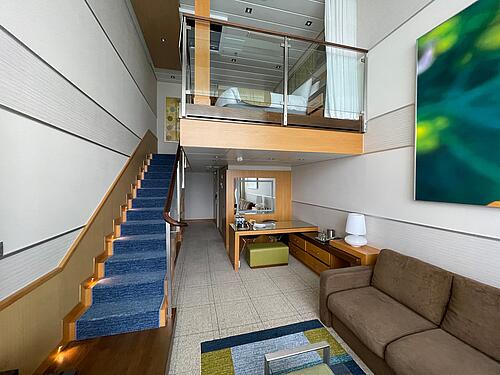 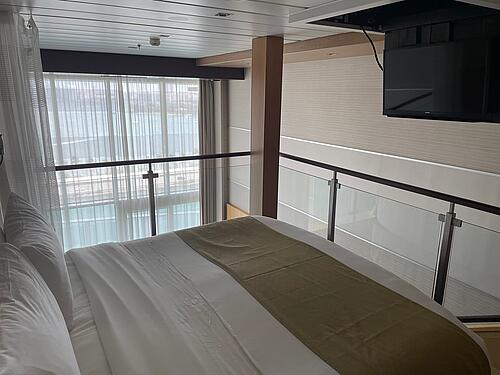 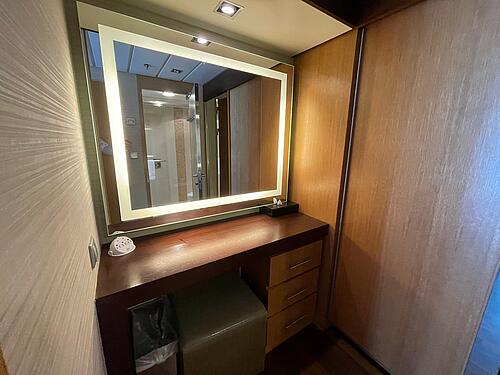 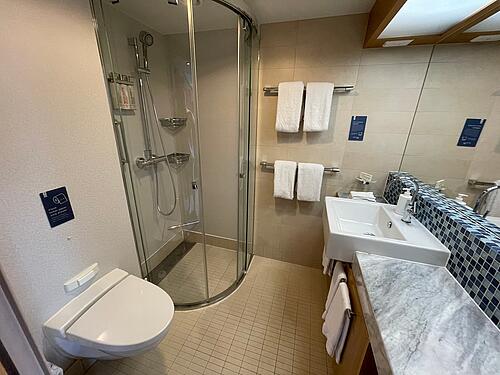 In terms of layout, the room looked the same on Oasis. The split-level design is a clean departure from traditional cruise ship cabins, and the view you have from either level of the ocean from the huge floor-to-ceiling windows is fantastic.

There are two bathrooms (one on each level) and a giant balcony.

Our next stop was to take a ride to the Rising Tide bar, which is an Oasis Class signature venue where the bar moves slowly between the Royal Promenade on deck 5 and Central Park on deck 8. 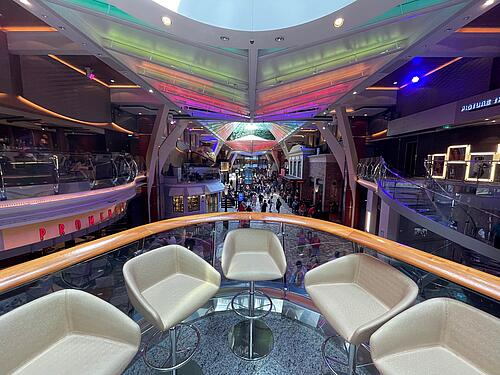 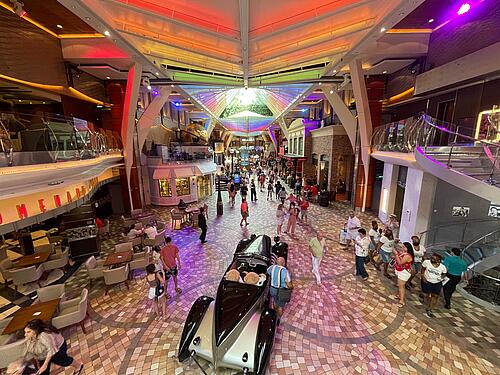 It was not only my first drink on the cruise, but my first time trying the new biodegradable straws. 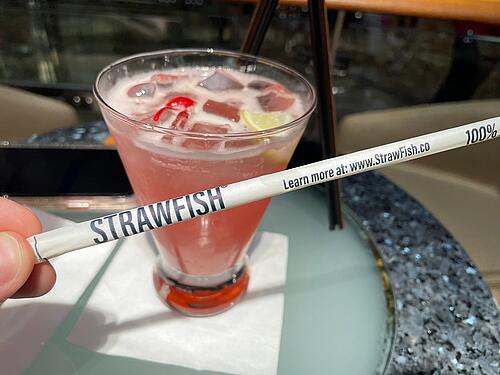 Compared to the paper straws this replaced, it felt much better and didn’t break down at all in my drink.

Friends of mine made it on board and we went to see Portside BBQ. 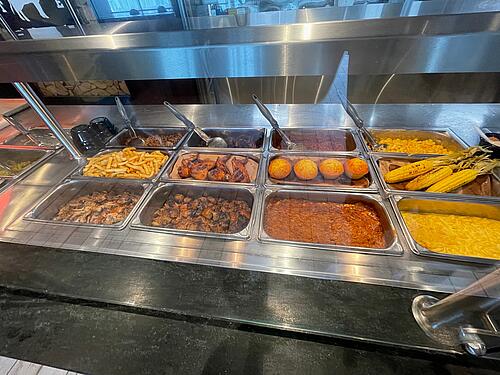 One of the best changes to Oasis since its Royal Amplification in 2019 was the addition of a new restaurant concept at Portside BBQ.

Having already had lunch, I couldn’t resist having a plate of smoked turkey and cornbread. 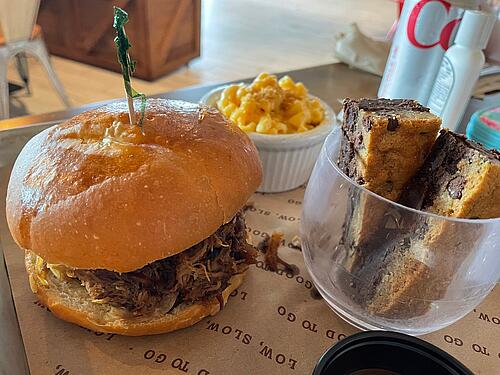 I would also be remiss if I did not mention the quality of the brookie dessert, which is half cookie and half brownie. 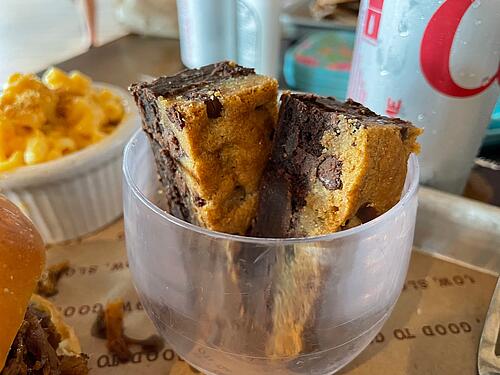 Then we were welcomed aboard the Schooner Bar trivia. Trivia is always a fun activity and I learned how many presidents Bosnia and Herzegovina has had (3). We left Miami around 5 p.m. 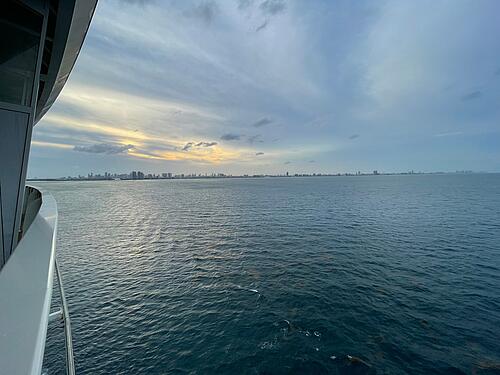 Dinner tonight was at Chops Grille. 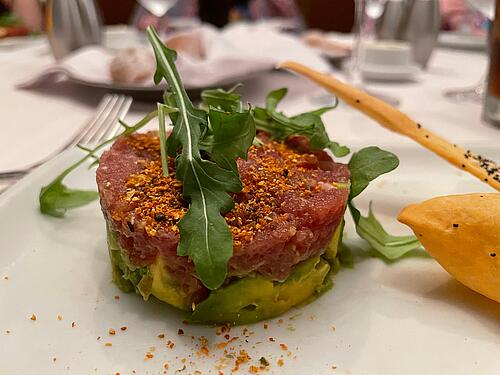 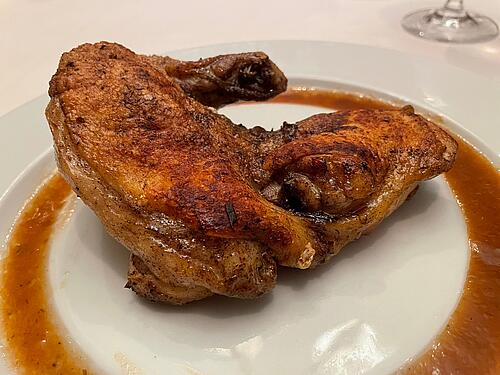 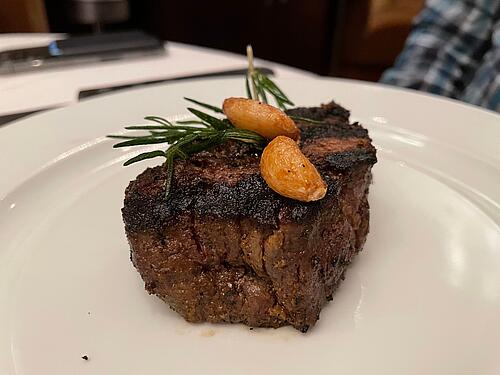 Our evening entertainment was Aqua80s in the AquaTheater, which is a show about 1980s music. I love this show the most of all AquaTheater shows simply because I know all the songs and I think the energy level here matches the music perfectly. Tomorrow is a day at sea.

I purchased the chat feature from Royal Caribbean to try it again. 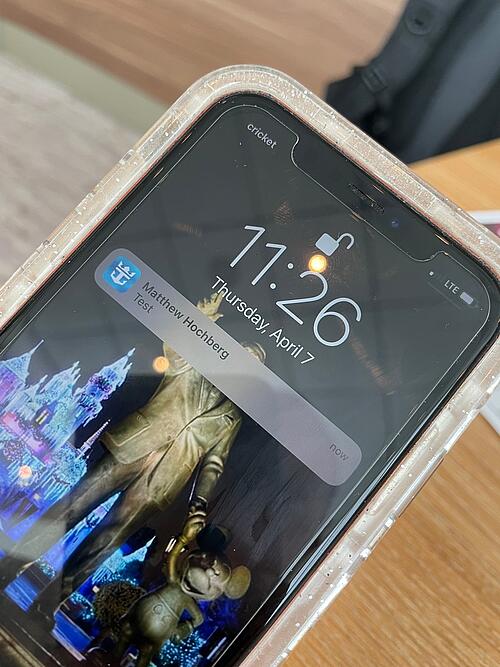 I first activated it on my phone and was able to send messages to my wife and she received them without paying for the feature on her phone yet. It would be a good scenario for kids to buy it for them so they can potentially send one-way messages.

I also tested chat notifications and received push notifications when the phone was not actively being used, and even on my wife’s Apple Watch. 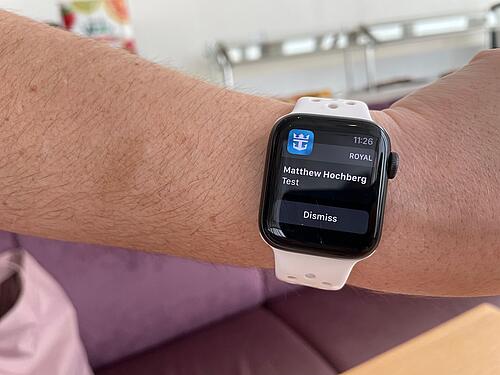 There was a lot reminders to passengers to do the muster drill via the public address system. Definitely more than I remember hearing about a navigation, and most were in Spanish.