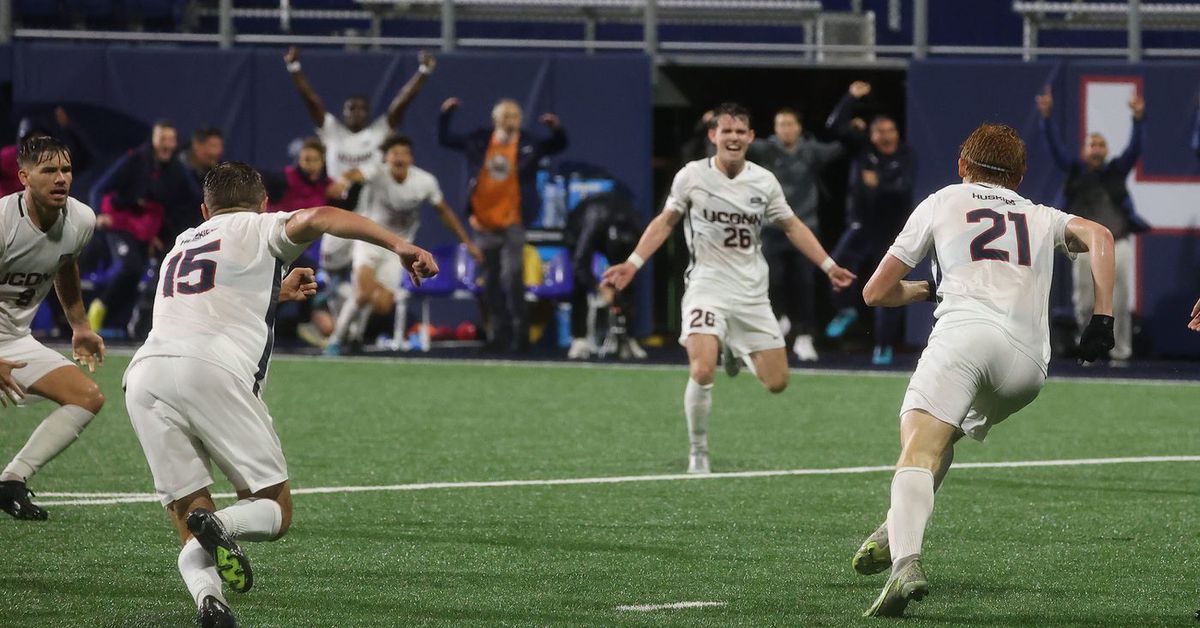 UConn’s men’s soccer team faces a long road to national power status. In the first year under head coach Chris Gbandi, there have been some promising moments for the 3-5-1 side this season.

The latest glimpse came during last night’s downpour when the Huskies dispatched Providence 3-2 in a dramatic home-and-away game. Connecticut native Scott Testori claimed the 89th-minute winner, stunning a Friars side – picked first in the Big East pre-season poll – who had already equalized twice.

After the match, Gbandi was proud of the team’s fight.

“Thanks Providence for fighting back, but our guys showed the right mentality today,” he said on the team’s Twitter account. “We have been through a lot in the past few weeks. They kept fighting and fighting, and it showed with that third goal. Many teams would give up and settle for a tie in this situation.

First-year forward Eli Conway kicked the scoring for UConn in the 22nd minute, heading home with a well-weighted cross from second Kai Griese. Providence got their first equalizer 19 minutes later, capitalizing on poor marking after UConn let a corner bounce into the penalty area.

UConn’s high pressing style and Providence’s overall rivalry meant a lot of chippins; the Huskies were called for 14 fouls and received three yellow cards. The builder’s play was solid and Gbandi’s boys moved the ball well, but the end product was lacking. However, in the 82nd minute, a 25-yard free kick from second Mateo Leveque deflected off the Providence wall, hit the crossbar and somehow ended up in the net. It was more of a fluke, but it’s better to be lucky than good, isn’t it?

Not even a minute later, Providence came back and again from a corner, smashing a loose ball into the box. A draw seemed inevitable until junior captain Jayden Reid weaved through two defenders and fired in a looping cross with his left that found Testori in the middle. Cue the pandemonium.

The Huskies are now 1-2-1 in the Big East, after dropping points to Butler and Xavier, while tying Creighton. Don’t forget that junior midfielder Moussa Wade, who led the Huskies in points last year, was lost in the NJIT game and reportedly tore his ACL. In his place, Leveque had two goals and five assists, while transfer great Frantz Pierrot leads the team with three goals. Testori and junior Soren Ilsoe each have two goals and one assist each.

Beyond the numbers, Gbandi has the Huskies playing an appealing style of football, with Leveque pulling the strings in the middle, Pierrot a more than capable target man and attacking plenty of talent on the wings.

However, high press and shoddy marks bit the Huskies in some games, like Syracuse’s 5-0 shellacking and Butler’s 4-1 hammering. Fortunately, Pierrot is the only graduate this year. While that means this season could have a lot of growing pains where the results aren’t always there, better days could be ahead. The Gbandi boys have shown a commitment to an identity and enough promise to make 2023 a potential statement year.

In the meantime, keep an eye out for former UConn Andre Blake as his top-placed Philadelphia Union look to storm the MLS playoffs. Blake is one of the favorites to win his third Goalkeeper of the Year award.

Don’t forget either Cyle Larin, whose Club Brugge trash their Champions League group which includes Atletico Madrid, FC Porto and Bayer Leverkusen. While Larin has only played seven games for the Belgium team, he will be a scoring threat all November for Canada at the World Cup.