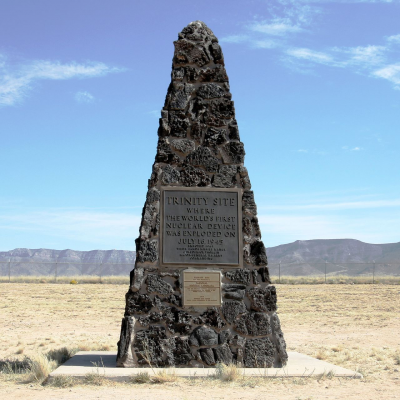 “Beat my heart, three-person God, for you

For now, strike, breathe, shine and seek to mend;

That I can rise and stand, flip and bend

Your strength to break me, blow me away, burn me and make me beautiful.”

As Trinity Sunday approaches, it may be time to reconsider what is said to be the dawn of the age of nuclear weapons. Why now? Because the first detonation of a nuclear weapon in 1945 was codenamed “Trinity”.

The director of the Los Alamos Laboratory, J Robert Oppenheimer, chose this name because he was inspired by the poetry of John Donne and indeed the poem quoted above was his favourite.

A year later, it was this type of plutonium implosion bomb that devastated the city of Nagasaki in Japan following the destruction of Hiroshima three days earlier.

But the world’s most powerful nations have not been content with this demonstration of the destructive power of these weapons, but have continued to carry out tests that continue to harm the lives and environments of many of the poorest people in the world. our planet.

The United States secured a rare agreement with the United Nations in July 1947, in fact the only one ever granted, for the trusteeship of Micronesia on the understanding that it would improve the lives and economy of the islanders. Only five days later, he established the “Pacific Proving Grounds” by the United States Atomic Energy Commission. This allowed him to carry out 105 tests in the Pacific, atmospheric and underwater, between 1946 and 1962.

So is the UK innocent?

If anyone asks about the victims of nuclear weapons, it is usual to look at the victims of the bombs dropped on Hiroshima and Nagasaki, both those who were killed at the time and also the many people who died in the in the years that followed, due to their exposure to radiation. We often forget those who have died or whose lives have been devastated as a result of weapons testing. There has been an increase in the number of cancers directly attributable to radiation exposure related to fallout in the Marshall Islands and pollution in the Pacific Ocean. Even small amounts of radiation accumulated by eating contaminated fish have gradually accumulated, leading to disease and particularly affecting pregnant women and their unborn babies. There were many miscarriages and babies, so deformed they were known as “jellyfish babies” and did not survive.

The 20,000 British servicemen who were taken to watch UK testing in Australia and the South Pacific are now allowed to claim compensation for health issues resulting from their exposure.

The Nuclear Weapons Ban Treaty, which entered into force in January 2021, prohibits all activities related to nuclear weapons, including testing, as well as the obvious activities of using or threatening to use them. Pope Francis and all mainstream churches condemn nuclear weapons and call on all governments to support this treaty.

So, in this season of the Holy Trinity, may we pray for a real “heartbeat” from our politicians, that they will turn away from seeking security in nuclear weapons and turn towards the security of the faith, love and peace.

Christian CND is a member of the National Justice and Peace Network (NJPN). Its annual conference will be held from July 22 to 24, 2022, on the theme “Hope is a verb with rolled up sleeves”. Book now on: www.justice-and-peace.org.uk/conference/