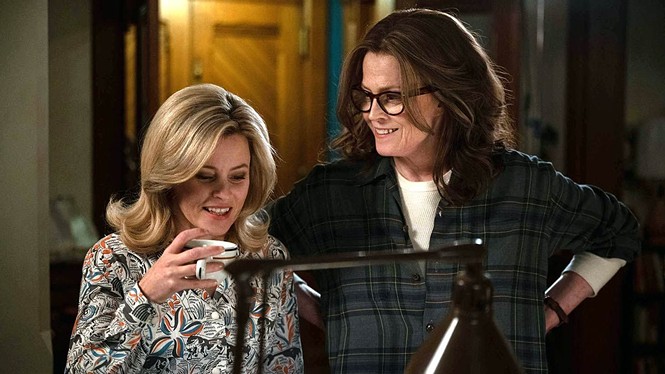 Quiet on the West Front ***1/2
More than a century after the end of World War I, this latest adaptation of Erich Maria Remarque’s historical novel demonstrates that his story is still a powerful reminder of the futility of war, and how it kills souls before it even kill the bodies. Paul Bäumer (Felix Kammerer) is one of many German classmates who enthusiastically forge permission from their parents to enlist in 1917, only to discover the horrifying realities of what was sold to them as a heroic enterprise. Director Edward Berger stages some remarkable combat sequences, including suicide charges across No Man’s Land and an assault by French tanks that looks like something out of a monster movie. And Kammerer’s performance perfectly captures a descent into darkness, from the harrowing scene involving the excruciatingly slow death of a French soldier, to his gaze from a thousand yards during a last-ditch assault on Armistice Day. The scenes centering on people in positions of power – including the head of the German diplomatic delegation (Daniel Brühl) and a German general (Devid Strisow) – exist mainly for ironic juxtaposition and inevitably lack the power of the frontline sequences. battle once you get the point that those who weren’t actually fighting the war were either bloodthirsty, stupid, or ineffectual. “Anti-war narrative” may be a redundant term if the narrative is honest, but the terrific cinematography here makes the idea terribly urgent. Available October 28 via Netflix. (NR)

Call Jane ***
Director Phyllis Nagy’s fictional story based on Chicago-based pseudonymous group ‘The Janes’ – which helped women obtain illegal abortions from 1968 to 1973 – certainly hits differently now than when it premiered at Sundance in January. Elizabeth Banks plays Joy, a 1968 suburban Chicago housewife who faces a life-threatening medical condition if she continues with her pregnancy and cannot get a medical board to approve an exception. She reaches out to the Janes for her own firing, then gets involved to help the group. Despite the serious subject matter — and a terrific extended sequence of Joy’s abortion that captures her terror with her literal white knuckles clutching her bed — Nagy also finds ways to be playful in her storytelling. A scene of Joy inspecting her own genitals for the first time is set to Malvina Reynolds’ folk tune “What’s Going on Down There”; Joy’s practice of performing abortions by scraping pumpkin seeds quickly cuts to dozens of pumpkin pies on the counter. Banks plays Joy’s evolution from a moralist who judges many of The Janes’ clients to a compassionate lawyer, mostly with subtlety, though her experience is inevitably tied to her rejection of “sweetheart” gender role expectations. , why isn’t my dinner ready”. The third act is a bit of a mess, precipitating Joy’s (Chris Messina) husband’s transition from stalwart conservative to smiling ally, and relegating the 1972 Chicago police raid on the Janes to brief mention. Along the way, however, it’s a humanized version of a politicized story that avoids getting high on its own righteousness. Available October 28 in theaters. (R)

Decision to leave ***1/2
Because Park Chan-wook has often doctored quite extreme content (Old boy, The servant), it’s been all too easy to forget what an amazing visual stylist he is. Here he tackles the kind of psychological drama that would have intrigued Hitchcock in his heyday: Busan, Korean police detective Hae-jun (Park Hae-il) takes on the case of a man’s death during a escalates and becomes obsessed with the victim. widow, Seo-rae (Tang Wei), who could also be a suspect. Park and co-writer Jeong Seo-kyeong construct a complex story involving Hae-jun’s long-distance marriage and an interaction between the two main characters where it’s not entirely clear which of them is keeping the infatuation alive. the most unhealthy for the other. But while the tangled psychology could have been intriguing even with a fairly basic cinematic approach, Park creates indelible images that heighten the tension, from surveillance by Hae-jun who metaphorically places him in the same room with Seo-rae, to editing by Park’s longtime collaborator Kim Sang-beom, who can jump between timelines with brilliant juxtaposition. The film’s second half — which includes a change that would involve spoilers to explain — doesn’t quite maintain the same momentum, nor does it completely pack the emotional punch that’s building up between Hae-jun and Seo-rae. Along the way, though, there’s the undeniable thrill of watching a master figure out how material can be elevated through bold, sometimes hilarious, always unique choices. Available October 28 at Broadway Center Cinemas. (NR)

The Good Nurse ***1/2
In this psychological drama based on a true story, a monster lurks where you hope to find healing, and it does so in both individual and institutional form. In 2003 New Jersey, intensive care nurse Amy (Jessica Chastain) befriends her new colleague Charlie Cullen (Eddie Redmayne), unaware that Charlie’s patients during his previous work stoppages tend to to die unexpectedly. Amy and Charlie’s close-turned-suspect connection works through two strong performances, especially in a disturbing confrontation at a restaurant that highlights Amy’s genuine concern and affection for someone who’s been kind to her. But at the same time The good nurse gets a lot of “your friend could be a murderer” mileage, it gets even better once it becomes clear that America’s healthcare system is even scarier. Between the obstruction of cumbersome hospitals faced by two police investigators (Noah Emmerich and Nnamdi Asomugha) and the desperation for health care that forces Amy, a financially strapped single mother, to work despite a potentially heart disease Deadly, there’s a lot of wayward, callous nastiness to go around. Tobias Lindholm’s icy direction highlights how easy it is to operate as a mindless agent of death in a place that proves less interested in saving lives than saving itself. Available October 26 via Netflix. (R)

Louis Armstrong’s Black & Blues **1/2
The title alludes to a rather specific focus of director Sacha Jenkins’ profile on legendary jazzman Louis Armstrong: connecting his career to his race and how his personal feelings weren’t always reflected in his public persona. If only Jenkins had really brought this idea to life. Structurally, it’s not exactly a cradle-to-grave biography, evoking his New Orleans childhood primarily to note how his incarceration in a boys’ home allowed him to take music lessons and bounce back at various times. of his professional career. Jenkins has access to a treasure trove of material in Armstrong’s recordings and diaries, in addition to footage from talk shows and other public appearances, which sheds light on how the musician dealt with issues such as playing. in the American South of the Jim Crow era. But Jenkins also can’t resist the kind of venerable commentary that’s part of the course of “great artist” documentaries, acknowledging his innovations as a trumpeter and vocalist in a way that seems completely disconnected from more personal material – and that leaves out how the film somehow finds time to address Armstrong’s obsession with taking laxatives. There are really two documentaries here – one a character study on a very particular life challenge of Louis Armstrong, the other a Wiki-doc – and it’s a bit of a shame every time Jenkins stops the first in its tracks to noodle with the other. Available October 28 via AppleTV+. (NR)

Wendell & Sauvage ***
It’s hard to imagine a filmmaker as singularly visionary as Henry Selick who was so consistently undercredited for his own films, from “Tim Burton’s” The Nightmare Before Christmas to Jordan Peele’s top marketing for this latest stop-motion fantasy. Peel and Selick co-wrote the screenplay (based on an unpublished book by Selick) about an orphaned teenager named Kat (Lyric Ross) at a Catholic boarding school who has the power to summon demons to the land of the living, which draws attention. underworld dwellers Wendell (Keegan-Michael Key) and Wild (Peele), who yearn to escape their evil father (Ving Rhames). The protagonist’s character content is a bit weak, with Ross’ performance never really capturing anything unique in Kat’s anger and guilt over the death of her parents. What remains is the imaginative detail baked into this world, visually and narratively: Wendell & Wild discovering that the supernatural Rogaine they apply to Dad’s scalp can raise the dead, but is also a narcotic; a spooky teddy bear that makes summons easier; the afterlife of the damned like a deadly amusement park. Best of all is the character design, which resists the homogeneity of CGI faces to create weirdly unsettling quirky looks, like the zombie priest with the noggin and undertaker makeup. Even if the story doesn’t connect on an emotional level, a film that dazzles from start to finish practically defines a “visionary” like Selick. Available October 28 via Netflix. (PG-13)