It has been 20 years since the Millennium Line became a fully connected service linked to TransLink’s bus network on September 3, 2002.

SkyTrain’s Millennium Line is Metro Vancouver’s second rapid transit line, built following what is now known as the Expo Line, and opened in stages from 1986 to 1994. Its official opening took took place on January 2, 2002 with trains departing from Waterfront station in Vancouver, sharing tracks with the Expo line to Columbia station in New Westminster, then diverging northeast to Braid station. The line from Braid Station to Commercial–Broadway Station opened on September 3, 2002. Lake City Way station followed the opening on November 21, 2003, with the current VCC-Clark station terminus opening on January 6, 2006.

Today, the Millennium Line operates from the VCC-Clark station in Vancouver to the Lafarge Lake-Douglas station in Coquitlam, connecting Vancouver, Burnaby, Coquitlam and Port Moody. 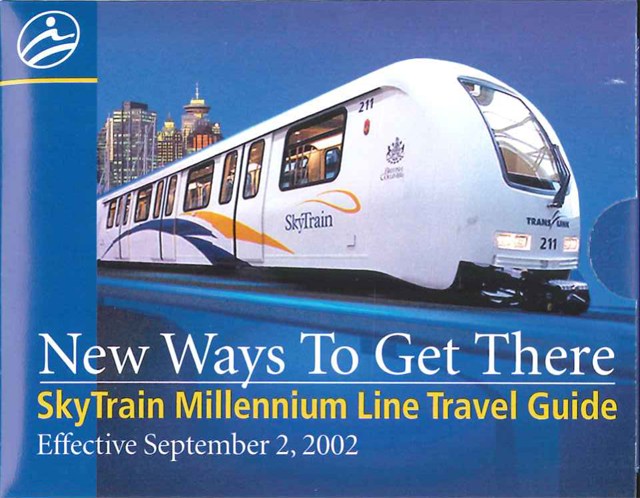 A lot has changed in 20 years

Since opening in 2002, SkyTrain’s Millennium line has undergone a significant change in operating mode in preparation for the opening of the Evergreen Extension, an 11-kilometre extension completed in 2016. And in 2018, the service model has changed to simplify the way Millennium Line trains travel. via Lougheed Town Center station, creating faster and more reliable journeys.

In honor of its 20th anniversary, here are 20 facts about the Millennium Line:

1 | The line was opened in 2002 and was named in recognition of the new millennium.

2 | Each of the original 13 stations was uniquely designed by prominent BC architects.

Check out this station tour brochure for an overview of each of the stations!

4 | The concrete needed for all the columns of the new line could fill SIX Olympic swimming pools!

5 | More than 500 columns support the guideway along the original section of the Millennium Line.

6 | Nearly 6,000 prefabricated guide pieces, each measuring more than three meters in length, were used in the construction of the guideway.

7 | Placed end to end, these guide pieces would span the length of 190 CFL football fields!

8 | Good lighting and open spaces were the most common requests among community station design initiatives.

9 | The construction of the guideway used an overhead cantilever truss system. A technique that had never been used in British Columbia

10 | As part of the Millennium Line project, SkyTrain added 60 Mark II cars to the fleet

11 | When it opened in 2002, the Commercial Drive station was a separate station from its neighbor, the Broadway station on the Expo line.

The two officially united on Commercial-Broadway on September 7, 2009.

The extension is 5.7 kilometers long, and all but 700 meters will be underground

13 | The Millennium Line has 17 stations (6 under construction)

15| The Millennium Line was almost no SkyTrain at all!

In 1995, the BC government announced a light rail line running along Broadway and Lougheed Mall to downtown Lougheed. The switch to SkyTrain technology took place in 1998. Ironically, when the Evergreen extension was first proposed, light rail was also considered for this route!

17 | The Millennium Line connects to the West Coast Express at Moody Center and Coquitlam Central stations.

19 | The “Snake Hill Tunnel” which brings trains to Port Moody is 2.14 kilometers long – currently the longest tunnel on the Expo/Millennium line.

This title will move to the western section of the Millennium Line when the Broadway Subway Extension opens, with a 5-kilometre tunnel to Arbutus.

20 | Evergreen Extension stations were the first on the Expo/Millennium lines to feature real-time train display information.

Still hungry for more Millennium Line content? Check out this excellent introduction to the construction of the 13 stations and over 21 kilometers of track that made up the original Millennium Line.