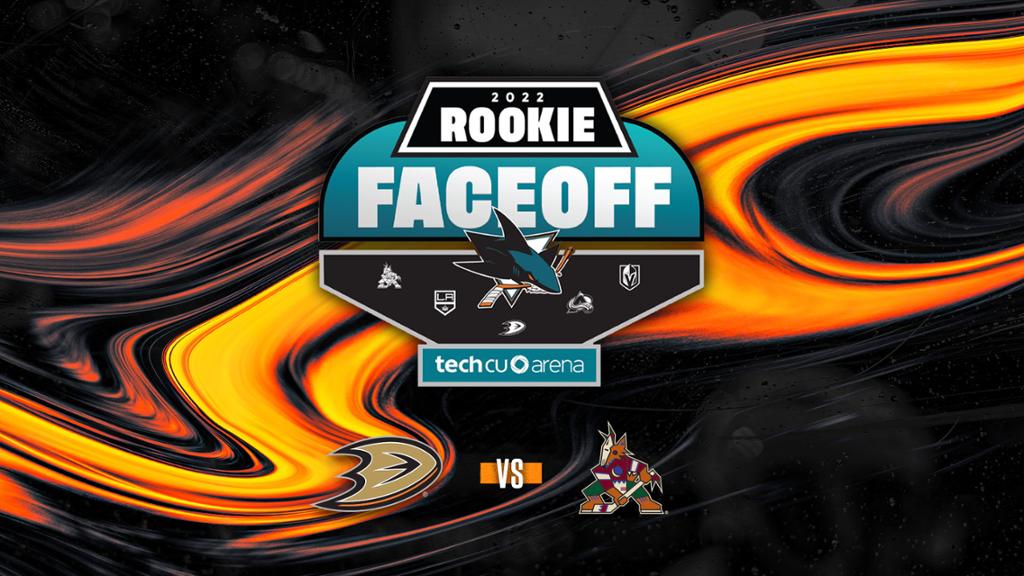 Brayden Peters will start in net for the Ducks. A guest at training camp, Peters has spent the past three seasons with the Calgary Hitmen (WHL), posting a .906 SV percentage in 47 games last year.

The Arizona lineup, with two former first-round picks, Connor Geekie and Dylan Guenther, skating together on the front second row:

And we start from the Orange ice rink at Sharks Ice…

1:00 – The teams trade chances from the slot machine in the first minute of the game, with Pastujov getting the offer from Anaheim after a neutral zone feed from Ben King. The two guards, Peters and David Tendeck of Arizona, however, stand tall.

1:45 – A few new faces in the Anaheim roster today, including 2022 fifth-round pick Connor Hvidston and camp invite Julian Beland skating with Blake McLaughlin on the fourth line. Defenders Charles Côté and Luka Profaca are also in the game, paired at the back.

4:25 – Rating with a good look from the blue line after a clever movement along the wall by Jacob Perreault, but no traffic in front of the net so it’s an easy glove except for Tendeck. Côté is one of the biggest and youngest players on the ice – a 2004 birth year who is 6-6.

5:47 – Another quality scoring chance for the Ducks, this time in transition as Beland carried the puck down the left wing before finding Luneau trailing, but Tedneck made another glove save to keep him scoreless.

9:27 — Arizona gets the first power play of the game as Luka Profaca is penalized for tripping after the Coyotes pinned the Ducks deep in their defensive zone.

11:27 – The Ducks erase the penalty and get another opportunity in transition, as Cote goes up the right wing following a turnover from the Coyotes and shoots Tendeck’s mask.

12:35 – Anaheim with a four-on-two run but one pass too close and the chance ends without a shot on goal.

18:05 – The best save of the period for Peters as he flashes down the left pad to deny a high offer from Coyotes defender Lleyton Moore.

6:50 p.m. – The Ducks get their first chance at the power play as Sean Tschigerl gets tripped up by Cole Cormier.

19:49 – 1-0 Ducks. Brayden Tracey puts the Ducks ahead, making his way to the slot with a hesitant move and beating Tendeck to the glove to give Anaheim the lead just before the first intermission. Pavel Mintyukov and Perreault get the assists.

20:00 – The Ducks take the lead in the locker room thanks to Tracey’s power play count. Coyotes lead in shooting battle, 11-8.

0:00 – We’re back for the second quarter of Sharks Ice, with the Ducks up 1-0 and looking to replicate their second-period success from a night ago.

Tweet from @AnaheimDucks: We’re back for the second. We lead 1-0. pic.twitter.com/UUnjgVg4P0

2:16 – Logan Downhaniuk’s massive strike on Perreault, whose helmet flew off, in the neutral zone and the Ducks immediately come to the defense of their teammate, namely Nathan Gaucher who absolutely beat Downhaniuk in the scrum. Good to see Perreault coming back right after as he and Tracey both came through to give Gaucher some props in the penalty area.

After a long discussion to settle the penalties, neither team will get a power play. We’ll stay five-on-five as Gaucher and Downhaniuk get major fights.

4:45 – After some nice saves from Peters, an after whistle scrum leads to matching minors and 4v4 action.

5:32 – Peters with a sprawling save to his left, but Perreault is flagged for holding an aggressive forecheck. Ducks will have to kill over a minute of 4-on-3 action.

6:26 – Tyson Hinds gets behind the Arizona defense for a shorthanded breakaway, but the tall defenseman lands his wrist shot just wide of the net. Teams are now skating 5-on-4.

7:32 – Ducks kill and come back to 5v5. Noah Warren with a great penalty change, helping clear the front of the net so Peters could get a clean look on a point shot.

9:40 a.m. – Brave and selfless play by Colin Thiesen as he steps in front of Side’s bid from the left face-off circle and pays the price. He hobbles to the bench and is greeted by a bunch of high-fives from his teammates.

9:56 – Goes on the power play while Guenther is guilty of hanging Jacob Perreault.

Both teams make a goalkeeper change midway through regulation here. Francesco Lapenna in net for Anaheim while Dereck Baribeau takes over for Arizona.

12:40 – The Coyotes tie, 1-1. Baribeau makes a spectacular save on one side and the Yotes equalize on the other. Connor Geekie, Arizona’s second first-round pick in this summer’s draft, beats Lapenna from the right circle and we’re all tied just past the midpoint of second.

14:31 – Warren comes up to Julian Lutz in the neutral zone with a thundering jab along the wall, which opened up a transition chance for the Ducks. Anaheim will get a power play as Tschigerl was dragged down trying to grab the rebound in the Arizona crease.

16:31 – Ducks with some nice looks, but who are empty on the man advantage. Hinds recovered well after a rebound puck at the blue line led to a partial breakaway for Jack McBain, scrambling to force the Coyotes to send his offer wide of the net.

19:00 – Anaheim erases the penalty, thanks in part to another good shift from Warren, who calmly takes a touch on Geekie’s forecheck before clearing the area. Knocking Anaheim’s No. 47 off the puck was far from easy.

20:00 – Even at one after 40 minutes of play as the two teams exchange a few pleasantries on leaving the ice. McTavish and Perreault in the middle for Anaheim. Should make for a fun Sharks Ice third period.

Tweet from @AnaheimDucks: End of the second and we’re all tied. pic.twitter.com/3ovD19ALX6

5:35 – After a few minutes back and forth with few scoring opportunities, Arizona will have a big powerplay opportunity as Perreault is sent to the box for roughing. Anaheim’s penalty kill will be tested again.

7:35 – Ducks get the big kill and now a chance to play their own power as an odd man rush forces the ‘Yotes to a hits penalty.

10:00 – Arizona matches Anaheim with a big kill. We’re back to 5v5 as part of the regulations here.

12:43 — Warren gets a one-point shot in traffic after Tschigerl clears a loose puck on the forecheck, but Baribeau reaches the top of his crease and swallows it with no rebound.

13:48 — Luneau weaves through the Arizona defense in an end-to-end run, but his cross pass finds no target as his teammates change behind play. Leads to an odd Arizona man rush and a Ducks hook penalty. Another big kill for Anaheim here.

Tweet from @MattWeller_: Hard not to be impressed with 2022 second-round pick Tristan Luneau’s play this weekend. Fluid skater who consistently makes clean breakout passes and good decisions with the puck. Also showed his ability to pick his spots by joining the rush. #FlyTogether pic.twitter.com/9dkt5cn9z5

14:55 – 2-1 Coyotes. Arizona finally makes the Ducks pay for the parade to the penalty box. Geekie finds Ben McCartney with a shot pass into the low slot and McCartney redirects it over Lapenna’s shoulder. The Ducks have their backs against the wall now, trailing by one goal with five minutes left.

17:00 – The Coyotes do their best to play wide, driving the puck deep and clogging up the middle of the ice. The Ducks were unable to settle in the offensive zone to pursue that tying goal.

18:11 – Lapenna offers a big save on Milos Keleman, who followed up a clearance attempt and got a shot. Ducks run out of race track at the end of the third.

19:41 – The Ducks will get a late power play after a reckless hit from behind by Coyotes forward Manix Landry. The Ducks players again jump to the aid of their teammates, but the only penalty will be a minor against Landry. Anaheim will have 20 seconds of play at 6 v 4 to score the tying goal. McTavish, Perreault, Tracey, Lopina, King and Luneau for Anaheim.

20:00 – Perreault narrowly misses the net in the final seconds and the Coyotes win 2-1. Anaheim’s first regulation Rookie Faceoff loss since 2015.