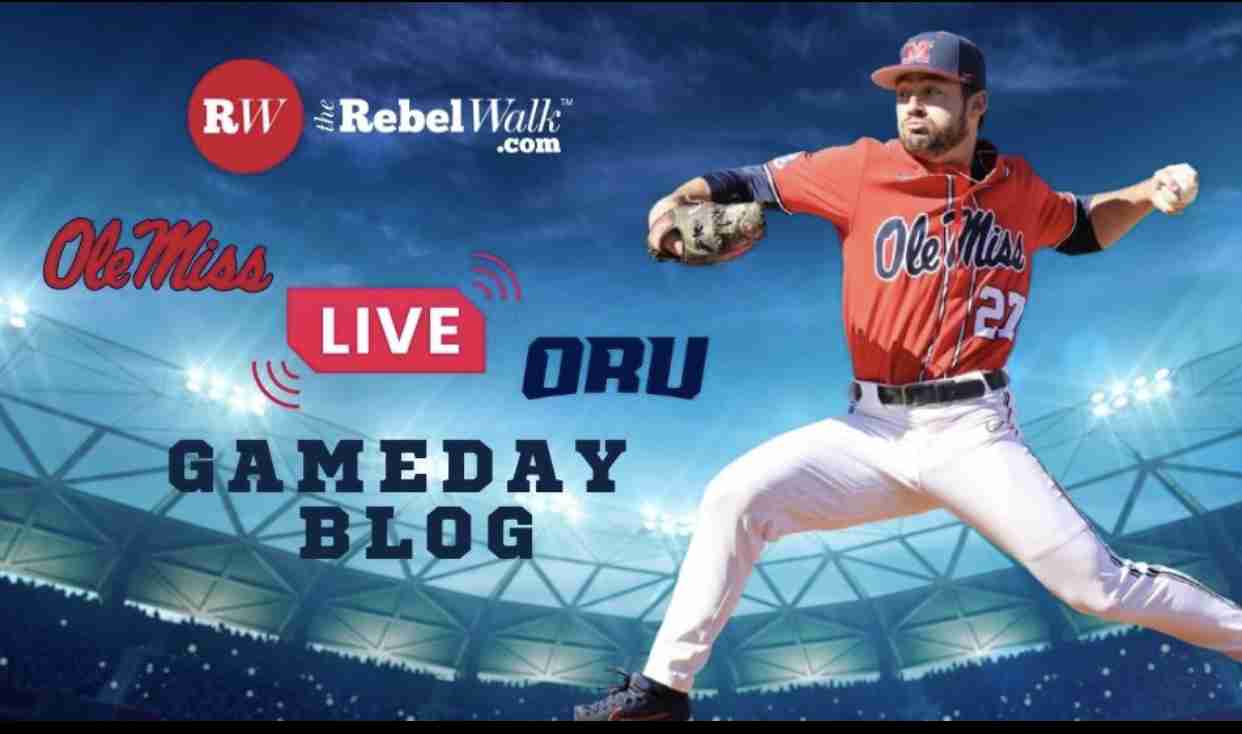 WE WILL BE BRINGING A DOUGH-BY-DOUGH UPDATE HERE IN OUR LIVE BLOG THROUGHOUT THE GAME. RATINGS UPDATES APPEAR IN GREEN.

SCROLL DOWN FOR UPDATES AND TAP REFRESH AS NEEDED.

Here is the Rebels starting lineup for today:

Ole Miss scores four goals in the fourth to take a 7-2 lead over Oral Roberts. The deadline for the Golden Knights will be 4-5-6. Breeze-Denny-Loftin. John Gaddis back on the mound for Ole Miss. He has thrown 81 pitches as we start the fifth.

Top of the 5th

Broken: Gaddis swings him down! One out!

Denny: He flies left for second on fifth.

Loft: Loftin says he is HBP…referees will go for the official exam. It is established that he is not hit by the pitch, but he still gets the base on walks. Runner first, with two out.

Quinn: ORU seven-hole hitter Quinn at bat. He hits .432 on the season. GADDIS HAS IT SEARCHED! At the bottom of the fifth we go!

Bottom of the 5th

Ole Miss leads 7-2. The deadline for the Rebels will be: 6-7-8. Dunhurst-Alderman-Leatherwood. * The new pitcher for ORU will be Weber for Isaac Coffey.

Hayden Dunhurst: The rebel catcher steps up to bat. He hits .188 on the season. Today, he was named to the Buster Posey Award Watch List, honoring the top receiver in the nation. He walks and the Rebels have the first runner on base!

Alderman Kemp: The Rebels’ second DH is up to par with runner-first, no-out. He is hitting .318 on the season. Dunhurst goes second on a crazy throw! Alderman draws the walk. Rebels with runners on first and second, no outs.

We start the fourth with Ole Miss leading Oral Roberts, 3-1. John Gaddis back on the mound for Ole Miss. He threw 54 total pitches at the start of the inning. Due for ORU: 6-7-8.

Loft: He gets a first single on the left.

Quinn: Single right for Quinn. ORU has the first two batters on base here in the fourth.

Jones: The Oral Roberts catcher is at bat with runners on first and second and no outs. He draws a walk and ORU has bases loaded with no outs.

Beichler: The Golden Knights center fielder arrives at bat with bases loaded and no outs. Gaddis swings him down! OUTPUT.

McCroskey: At the top of the drive we go to McCroskey. The ORU second baseman comes at bat with bases loaded and an out. He draws a step that scores a point. Ole Miss now leads 3-2.

McMurray: The ORU two-hole hitter features loaded bases, one out. He flies to Bench in the center. The runner holds on to third. TWO EXITS.

Bottom of the 4th

Ole Miss leads Oral Roberts, 3-2. Due for the Rebels: 7-8-9. It’s Alderman-Leatherwood-Burford. Coffey back on the mound for ORU.

Alderman: Kemp strikes swinging as we start the bottom of the 4th.

Leather wood: Hayden Leatherwood draws a walk. The Rebels have the first runner, one out.

Bench Justin: Rebels center fielder Justin Bench comes up to bat with the runner at second, one out. Simple bench on the left and Chatagnier scores! Ole Miss leads 6-2!

Jacob González: Shortstop Ole Miss is next. He draws a step of four lengths. Bench by the second. Rebels with runners on first and second, one out.

TJ McCants: Ole Miss RF next door. He has a runner up front, two out. He strikes to complete the fourth. The rebels score four in the frame and lead 7-2!

After two completes, Ole Miss leads ORU, 3-1. John Gaddis back on the mound for the Rebels. First of the order to come for the Golden Eagles.

Top of the 3rd

McCroskey: He retires to start the third. Nice game from Burford in third position. OUTPUT.

McMurray: First baseman McMurray falls while swinging. TWO OUTS, no one on it.

Demeter: The ORU DH is next. He lands a two-out single to the right.

Broken: Golden Knights third baseman bats with the runner on first, two out. It singles in the center. ORU now has runners on first, second and two out.

Ole Miss leads ORU 3-1 as we start the bottom of the third. Due for Ole Miss: 3-4-5. Gonzalez-Elko-McCants.

González: Shortstop Ole Miss with a fly down the middle. OUTPUT.

Elco: The Captain walks a four-pitch base. Ole Miss with runner first, one out.

Hayden Dunhurst: He flies to the center to end the round.

Top of the 2nd

Denny: The right fielder at the five-hole point singles to the left field line. One against, one withdrawal for ORU.

Loft: It singles in the center. Denny to the second. Runners at first and second with one out. The Rebels lead 3-0.

Quinn: The ORU seven-hole hitter is next. He chooses by the right side which marks Denny. Simple RBI for Quinn. 3-1, Ole Miss leads.

Jones: The ORU catcher is at bat. He has runners in the corners with one out. Gaddis makes it swing! TWO OUTS!

Beichler: ORU center fielder, the nine-hole hitter, comes forward with runners in the corners, two out. He strikes while swinging to finish the frame!

Bottom of the 2nd

ORU gets one on top of the 2nd to do it 3-1, Rebels. Due for Ole Miss: 9-1-2. Bench Burford-Chatagnier. Isaac Coffey back on the mound for Oral Roberts.

Reagan Burford: The Rebels’ first man in the second strike.

Peyton Chatagnier: Ole Miss second baseman lines up on the left. No one on base for the Rebels. Two withdrawals.

Bench Justin: The Rebels centre-back strikes while swinging. Rebels go down in order in the second but lead 3-1.

Top of the 1st

John Gaddis takes the mound to start the match for Ole Miss. The southpaw is 1-0 this season and sports a 0.64 ERA. He notched 12 Ks on the season at 2 BB.

Mac McCroskey: He laughs at the bunt. One out!

Dustin Demeter: The DH flies to Gonzalez short to finish the frame!

Bottom of the 1st

Due for Ole Miss: 1-2-3. Chatagnier-Banc-Gonzalez

Jacob González: The shortstop of OM simple on the right. Rebels have loaded bases, no escapes!

Tim Elko: The captain comes up to bat with bases loaded, no outs. He hits a two RBI single to left field! Bench and Chatagnier score! Ole Miss leads 2-0.

TJ McCants: TJ comes up to bat with runners on first and second and no outs. He chooses right! Rebels have loaded bases, no outs.

Hayden Dunhurst: Receiver Ole Miss hits but the Rebs still have bases loaded. One out.

Alderman Kemp: Alderman with the RBI ground that tags Gonzalez. Ole Miss has runners on second and third, two out. The Rebels lead 3-0.

Hayden Leatherwood: He flies to the left to end the round. But the The Rebels get three in the frame and lead 3-0.

Evelyn has covered sports for more than two decades, beginning her journalism career as a sports writer for a newspaper in Austin, Texas. She attended Texas A&M and majored in English. Evelyn’s love for Ole Miss began when her daughter Katie attended college on a volleyball scholarship. Evelyn has covered rebel sports for numerous outlets. In addition to working for The Rebel Walk, Evelyn is a sports writer for a Texas newspaper.