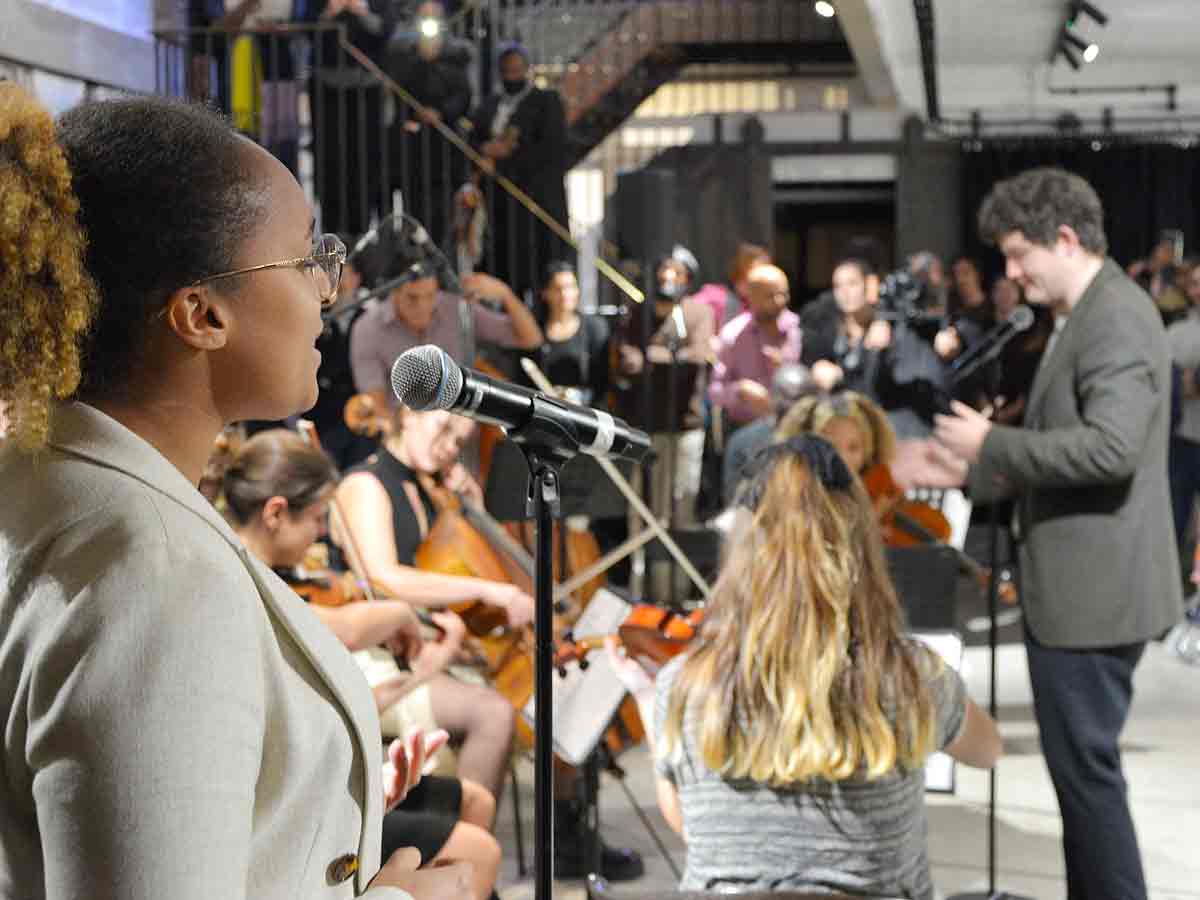 As the Brixton Chamber Orchestra continues its tour of local housing estates, Simone richardson meets Marketing Director Silas Armstrong and many of the many people who work with the orchestra to make it a central part of Brixton’s cultural excellence

Silas Armstrong, Marketing Director of the Brixton Chamber Orchestra, recently hosted a fundraising event downstairs at the Brixton Department Store, which featured a great mix of music with classical, rap and soulful vocals.

There were also exhibitions of photographs and works of famous South London Street Artist PiNS.

In July, PiNS collaborated with BCO to create a live canvas painting during an orchestral performance at the Stockwell Park Hall of Fame.

“We are looking to raise £ 5,000 and have the canvas permanently house a plaque commemorating its historic creation at the Stockwell Park Community Center.

“We have set up a #ChristmAsCanvasCampaign on GoFundMe to achieve our goal.

“For those who can afford to support BCO on a more regular basis, we have implemented the BCO Support Program which offers many benefits including early access to live shows and recordings, a bi-monthly open forum where speak out. the management of BCO, and an exclusive invitation to our annual BCO neighborhood party every summer: More information.

Silas Armstrong has lived all over London, but has made Brixton his home for the past five years.

” I have always loved music, theater and art. I’ve been in orchestras, choirs and various groups since I was 11, ”he says.

“After doing a BTEC in Music Technology from Richmond College, I went to the University of Westminster to study for a degree in Commercial Music.

“My first job after college was as a radio producer / social media coordinator at Ronnie Scott’s Jazz Club.

“When I started I didn’t know anything about jazz, but I love live music and I was open-minded.

“I then founded a digital music agency for commercial pop artists with a close friend and after growing from five to 20 people I decided to go solo, to become a freelance consultant so I could spend more. time to work on my ultimate passion. writing songs.

“I have always immersed myself in music and love to learn new skills and cultures.

“I’ve learned that I love to build things from scratch, take something with great potential and help make it happen.

“When I ran into Brixton Chamber Orchestra during the lockdown, I felt I had to find a way to get involved.

“The rest was persistence, bartering, and my proving before an official position opened nine months later.”

The Brixton Chamber Orchestra has lifted the spirits of many throughout the lockdown, performing live until Christmas this year and last year with director Matthew O’Keeffe.

When Silas first saw him and the orchestra, he said: “It was the first live music I had seen or heard in four months of total confinement, and I had it. tears in my eyes.

“As a singer-songwriter, I’ve always wanted to work with an orchestra, and it was my wife’s idea to bring in BCO later that year.

“I offered my social media skills to help promote their Christmas Estate Tour in exchange for a chance to perform one of my songs with the orchestra.

“I continued to work with BCO on a freelance basis (at a greatly reduced rate) until a scholarship was awarded and an official position opened up as Marketing and Development Manager, to which I immediately applied.

Silas handled the early lockdown well for himself: ‘I tried to make the most of 2020, documenting the early morning bike rides in a ghost town in central London, writing and recording a lot music and creating content for my first solo artist project, and getting my wife pregnant!

“The long term effects have taken their toll on me.

“As a freelance writer working alone from home, with a nine month old baby who was not there before confinement, life has completely changed for me!

“Less time to exercise, relax and write music, more time to work, take care of my family and less opportunities to socialize – although I hope that will balance out. with time.

“There is so much about Brixton that I love. It’s hard to pinpoint: the people, the food, the smells, the sounds!

“At the end of the day, it’s the community and the feeling of belonging. it doesn’t matter who you are or where you come from. There is nowhere else that I would rather be.

“My favorite local haunts change every week. Another reason I love Brixton so much – it’s constantly changing and evolving! ”

Michael Wharley is the photographer who captured atmospheric Brixton backgrounds with members of the orchestra in the foreground who were on display at the department store.

In Brixton for 20 years, Michael began his photography in 2008, training in darkroom photography at Photofusion – then on Electric Lane above Market Row, now at International House on Canterbury Crescent.

“One of my first paid jobs was filming an event at the Ritzy,” he recalls.

“Since 2013 I have run a studio in Waterloo, so although I do advertising and portrait campaigns for film, television and theater clients across the UK and beyond, most of my work is performed in Lambeth.

“I love the energy and the vitality of the place, which nourish my work.

“I love the park, the Lido, the cinema, the market and the bustle of the streets.

“I love living in a place that is one of the most diverse in the country… and Negril is (probably) the best prick in London and is only a three minute walk from my house.

“I also love shooting projects about the people who live and work here: the cold water swimmers at Brockwell Lido, the football coaches at St Matthew’s Project and the volunteer gardeners at the Brockwell Park Community Gardens.

“Working with BCO to show what they do for the region, while also showcasing the delicacies of Brixton, has been fantastic. “

To learn more about Michael’s work with BCO, consult his website and watch out for a Blog item – coming soon – with its images of the members of the orchestra.

Michael Bangura – rap name MEGAMIKES – was born and raised in Brixton Hill, where he grew up with his father Michael Senior and mother Haja Kamara until the age of 13.

“We then moved down the road twice in the Poynders Road area,” says Michael. He currently lives at the junction of the South Circular and Brixton Hill.

When not making music, Mike is a computer consultant from 10 am to 6 pm on Mondays and most evenings.

His love of rap was a relatively late development in his life.

“It’s ironic because I didn’t decide to make or release any music until my last year of college!”

“I wouldn’t say I particularly enjoyed doing anything at school in general.

“I have always been very good at English literature and language. I guess it also helps that my dad wrote plays in his youth and my younger brother performs – commercials for theater and TV – so I’ve always been around creatives in my younger years. ”

He was inspired by “seeing other people in my area pursuing music and succeeding in the industry and even changing perspective and culture.”

“I must also cite a very unique source of inspiration. the Flat zombies, based in Brooklyn, New York.

“I’ve been listening to them since I was 17 and watched them go from three teenagers to one of the most successful indie rap groups in the world.

“I’ve always wanted to try to make music and I’ve always thought: will it connect to a larger audience? And watch them and others, including Brixton Hill group of exercises 67, gaining ground, gave me the faith I needed to pursue rap.

“During last year’s lockdown I discovered I had a lot more free time to work on my trade and thank goodness I worked from home most of the last year.

“My girlfriend bought me a microphone and a digital interface for me to record, so I decided to write, record and, with the help of my classmate, mix and master a music project. five tracks that lives up to its name. Quentin Quarantino: Tales in isolation – which has been broadcast over 50,000 times.

“It opened so many doors for me and gave me the motivation to write and record a lot more! “

“I make the most of my time for myself and continually write and record more material of whatever ideas I have,” says Mike.

Brixton gave him a lot of inspiration. “The venues have given me the opportunity over the past two years to perform and express myself,” he says, “especially at the Ritzy, where they’ve hosted events such as ME (Music over everything) and Lost world.

“I am always grateful to them for always giving up and coming artists like myself a platform to showcase and express their talents.

“Another must be the cHip sHop, opposite the Dogstar.

“I’ve definitely met some big names over the years too,” says Mike.