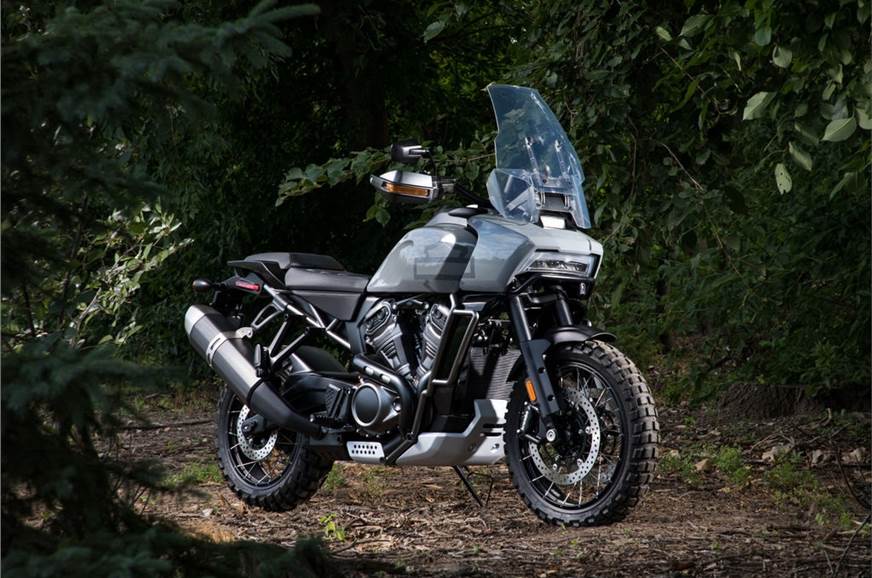 Is there another motorcycle company with a group of more powerful purist enthusiasts? I do not think so. But even a brand so heavily driven by heritage rather than modern technology ultimately needs to sit down and take stock. And you know Harley has been doing this for a while because it’s been a tough few years for the American icon. Profits have plummeted and it is now widely recognized that the problem is not easily fixed. Essentially, the average Harley-Davidson customer is getting older and not enough young people are drawn to the brand to replace them.

In this age of smartphone addicted zombies, getting new riders on motorcycles is a big challenge. But that’s not the only one, and Harley must also attract riders from other brands. The new Softails were a step in that direction, but not big enough – they’re all really fun to ride, but they’re still very “Harley” to the core.

Now I’m not gonna lie and say I expected to see the the company unveils an ADV bike or a sporty streetfighter – I don’t think anyone outside the brand saw it coming. But at one level, a drastic move was expected; there was no other way, really.

So let’s review what we know. The fun begins in August 2019 when Harley debuts the production LiveWire electric bike. It will be a premium and halo entry point for the Harley EV range, but smaller, more affordable e-bikes will be added later. Colleagues who used the LiveWire concept a few years ago have all come back with praise, so I’m looking forward to that.

But the LiveWire is not new news and a lot more feathers have been ruffled by the Pan America ADV-bike and the still unnamed streetfighter model (although I’m quite sure it will be called the Bronx. , a Harley brand name at the end of 2017). Both of these styles of motorcycles are extremely popular internationally, but they are almost completely foreign to the American brand. Nonetheless, these models will be part of a new modular family that will span 500cc to 1250cc, a segment Harley calls mid-size. These engines will be brand new, liquid cooled 60 degree DOHC engines. The deviation from the favored 45-degree V-angle, push rods and complete absence of fins on the crankcases shows that Harley is indeed breaking free from the chains of tradition. The company has done this to some extent in the past with bikes like the V-Rod, Night-Rod, and Street families, but never with much of its mainstream lineup.

However, the biggest news for us is the one Harley has talked about the least about so far. This would be the new small-displacement motorcycle that will be built in alliance with an “Asian manufacturer”. You can be sure that Harley is keeping a close eye on Royal Enfield’s incredible success, especially since the American brand was overtaken by RE in terms of global sales a few years ago. To answer, Harley must come up with a small-capacity motorcycle that offers the brand’s main appeal but at an acceptable price. I would love to believe that this bike will be powered by a V-twin engine that moves between 300 and 400cc, but, to be honest, it’s far too early to tell.

What I find most intriguing is the question of who Harley-Davidson chooses as an alliance partner. Manufacturing alliances are all the rage these days, and BMW, KTM and Triumph have all announced famous partnerships with Indian manufacturers. But the big difference here is that none of them have a locally made factory in India, whereas Harley has one in Bawal, Haryana, where it produces the Street family of bikes. A key line to note in Harley’s press release reads: “This new product and wider distribution are intended to fuel access and growth for Harley-Davidson customers in India, one of the markets. largest and fastest growing in the world, and other Asian markets ”. Beyond that, India certainly seems to be a priority, but other Asian markets are also important, so this partner should have a strong presence in Asia.

This rules out Hero MotoCorp, since the Indian giant focuses on Central / South America and Africa. In fact, much of Asia is dominated by Japanese manufacturers who specialize in choosing the region’s affordable two-wheelers: step-throughs. Of course, there are many other brands that have a big presence here as well, including Kymco from Taiwan and a number of Chinese manufacturers.

A few decades ago, the idea of ​​Harley-Davidson partnering with a Japanese brand seemed unthinkable. After all, it was affordable Japanese bikes, especially from Honda, that nearly bankrupted the American brand in the early 1980s. But these are very different times, and if a global giant like Toyota could partner with it. a rival like Suzuki, anything is possible, really. In fact, here’s a cheeky thought: Remember when Honda said they were working on a Royal Enfield rival? Maybe that’s it!

We’ll just have to wait patiently for full clarity, especially whether the partner will be from India or overseas. But I’m really excited about where the brand is heading. The company will of course continue to develop and sell its traditional line of Touring and Cruising bikes, but it is finally looking into the future. Hopefully Harley is successful and adds many decades of success to its 115 year history.