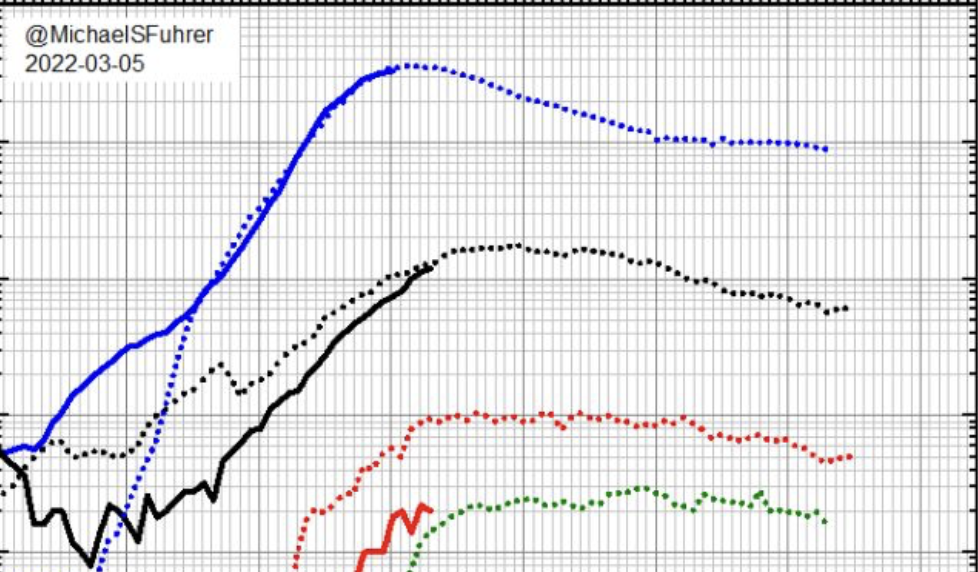 Martin Jenkins Consulting Firm Principal Nick Davis continues to produce interesting and relevant data on the trends of the Covid-19 pandemic. This is even truer when they give insight into what is happening or could happen in Aotearoa New Zealand.

He did it again on the question of when the Omicron variant might peak here Queensland and New ZealandTo do this, we compare New Zealand to Australia’s third most populous state, Queensland.

Why compare Queensland to New Zealand

New South Wales and Victoria have larger populations. For different reasons (the first due to wavering political leadership and the second due to a long shared border with NSW and previous lockdown fatigue), both states were overrun by the deadly Delta variant.

In contrast, like the rest of Australia (and New Zealand), Queensland has followed a strategy of successful elimination (zero tolerance) of community transmission. Additionally, Queensland’s population (5.2 million) is only slightly larger than New Zealand’s.

But Omicron’s high transmissibility meant that the elimination strategy lost its effectiveness, leaving mitigation as the only realistic alternative. Queensland has significantly more deaths (over 590) and a lower full vaccination rate for its eligible population (91%) compared to New Zealand (less than 70 and 96% respectively).

Queensland has also been disadvantaged by a long shared border with New South Wales (its death rate has skyrocketed since Omicron). Omicron also hit it earlier than New Zealand (whacked might be a more apt description).

Davis republished data comparing Queensland and New Zealand covering cases of infection, hospitalizations, intensive care admissions and deaths. With the daily rate of infections in New Zealand falling, this could suggest that we have already peaked.

This is where I disagree with Davis. In my view, this would be a premature assessment due to the greater proportion of asymptomatic cases on Omicron and under-reporting due to increased reliance on self-reporting due to higher transmission of the latter variant. Davis recognizes this.

For me, hospitalizations are a much more reliable indicator followed by ICU admissions and deaths. This is where its insightful chart fits in.

Davis concludes that to date, Aotearoa is “fairly following” the Omicron outbreak in Queensland. It may be premature as far as daily infections are concerned, but the torch must be pointed on hospitalizations in particular. They are at least a week behind on infection cases.

What could we expect

He predicts that if we follow Queensland’s experience, there could still be nearly double hospitalizations. Therefore, he argues, daily admissions could continue to increase for at least one to two weeks (that is, public hospitals will be under much more pressure for at least two to three weeks).

Interestingly, Davis’s thoughts are broadly in line with cautious advice from University of Otago epidemiologists who suggest the peak in hospitalizations could be over 1,100.

The pressure on hospitals will be further aggravated by the increase in staff who are sick or in isolation. This is a feature of the economy as a whole as evidenced today by the cancellation of the inter-island ferry for passengers.

But hospitals are among the workplaces most vulnerable to staff illnesses, if not the most vulnerable. Additionally, public hospitals are the largest workplaces within the geographical boundaries of the district health boards in which they are based. As Davis rightly observes, this is going to be very difficult for patients and hospital staff.

New Zealand’s internationally high vaccination rates and timely booster shots have helped. Davis notes that the country’s performance will depend on whether infection rates remain low among older age groups and other more susceptible vulnerable populations, and on the effectiveness of boosters to prevent serious illness.

Boosters seem to be effective, but the duration is less clear. Fortunately, New Zealand had a higher booster usage rate than Australia when Omicron first arrived on its shores.

Fingers crossed, but maybe we can come out of Omicron better than Queensland, which itself performed much better than the two most populous Australian states. In other words, if our hospitalization peak is reached in about two or three weeks.

Ian Powell was executive director of the Association of Salaried Medical Specialists, the professional union representing senior doctors and dentists in New Zealand, for over 30 years until December 2019. He is now a health systems commentator , labor market and political living in the small river estuary community of Otaihanga (the place by the tide). First published at Second opinion of Otaihanga