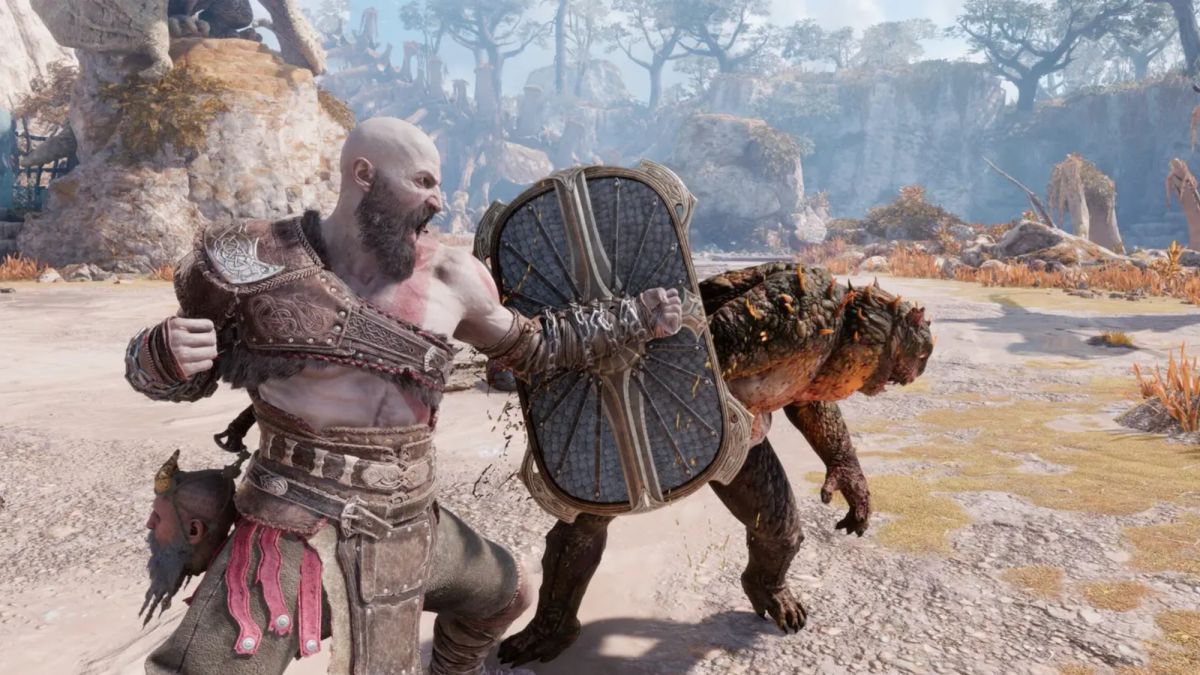 A sense of finality pervades God of War Ragnarök. That’s fitting, considering how Ragnarök signals the end of the Old Norse gods. From the game’s harrowing intro to its engrossing climax, you’re aware of the inevitable ending, which gives every action you take heightened significance. It elevates God of War Ragnarök from a simple action game to something more poignant.

Beyond the game itself, God of War Ragnarök is also essentially the unofficial end of the PS4 generation. Although the PS5 version contains features such as 4K resolution, haptic feedback, 3D audio and improved performance, it is very much a PS4 game at its core. It doesn’t spoil the overall experience, but it’s hard to forget that you’re still playing a next-gen game. But if this is indeed the latest first-party cross-gen title we see from Sony, then it’s one hell of a send-off for the blockbuster PS4.

Cross-gen or not, God of War Ragnarök is an exceptional experience. It’s arguably Santa Monica Studios’ best effort to date – and a title that people will be discussing for many years to come. Read on for our full review of God of War Ragnarök.

God of War Ragnarök takes place a few short years after its predecessor, God of War (2018). Fimbulwinter seizes Midgard, covering the Earth in snow and ice. The series protagonist Kratos, together with his son Atreus, has to deal with the harsh winter environment. At the same time, they must also fend off the frequent attacks of the grief-stricken goddess Freya, who seeks Kratos’ death for killing her son, Baldur.

God of War Ragnarök doesn’t make you expect the good stuff. After a chance encounter with the gods Aesir, Thor, and Odin, Kratos and his allies set out to stop the All-Father and stop Ragnarök from destroying the world.

While the overall plot is compelling, the characters’ interpersonal relationships are what hold it all together. It’s satisfying to see how Kratos and Atreus have become a capable team, as well as how each handles their respective destinies. The supporting cast, villains included, is no less intriguing. God of War Ragnarök is a masterclass in video game storytelling.

The side quests have equally compelling narratives as the main plot. You gain a greater appreciation for this game’s take on Norse mythology, as you gain insight into what drives each character. Side quests may not be too plentiful, but they are exceptionally crafted. The Assassin’s Creed series could learn a thing or two in this regard.

I don’t want to spoil the game’s many twists or exciting settings. Suffice it to say, Santa Monica Studio delivers a gripping story that’s as good as, if not better than, anything to come out of Hollywood recently.

The latest God of War saga is a more mature affair than the admittedly juvenile (but brilliant) earlier God of War entries. However, the series hasn’t forgotten its action/adventure roots, which are on full display in God of War Ragnarök.

As before, Kratos’ primary weapons are the Leviathan Ax and Chaos Blades, which are suited for Ice and Fire respectively. The ax works well against single opponents, and you can also throw it at pesky distant enemies. The iconic Blades of Chaos don’t hit as hard as the axe, but they’re great for dealing with multiple enemies. You are free to switch weapons at any time, giving you the ability to unleash some truly devastating combos.

Kratos gets a third weapon later in the game. I won’t spoil it here, but it’s a specific instrument of war that we’ve only seen twice before in the series. It pairs beautifully with the ax and blades, and I found myself using it a lot. It’s an appropriate weapon for a Spartan warrior like Kratos.

The game is also not lacking in variety of enemies. Each realm has distinct creatures and warriors that want to tear Kratos apart. Some villains are weaker against specific weapons and magic, requiring you to think and swap between different gear as needed. When it comes to boss fights, you’ll be pleased to know that this episode features some of the best encounters in the series.

There is one other playable character besides Kratos, although I won’t go into details here. They have a completely different set of attacks, which become more varied as the game progresses. I found playing as another character a welcome change of pace and looked forward to their sections.

As you complete missions, defeat enemies, and make discoveries, you’ll earn experience points that you can use to unlock skills. Skills include new combos, attacks, weapon upgrades and more. God of War Ragnarök is quite generous with experience points, and I was able to unlock most of the skills just by going through the main quest. This means that you don’t have to wait until late in the game to receive really powerful abilities.

You also level up Kratos as a whole by donning higher level armor, weapons, and enchantments. Like the previous game, the level cap remains in single digits, which makes it all the more meaningful each time you finally reach a new level.

Some enemies, especially those in side quests, may be on a higher level than yours. While you can survive these encounters on sheer skill (or luck!), it’s best to equip higher tier armor or upgrade your current gear in order to be on a level playing field. Leveling up is a slow and steady process, but it’s hugely satisfying to finally be able to defeat an enemy you couldn’t before.

Upgradable weapons and attachments also give you specific benefits. This, in turn, helps you customize a Kratos that suits your unique playstyle. For example, you can equip the snarling Spartan with gear that buffs his magic attacks, or you can rock gear that helps him deal – and receive – a ton of damage. Trying out different types of gear to get the best possible build is a lot of fun.

Exploring the Nine Realms has brought me as much joy as slicing undead Nordic warriors in half. Whether it’s the dank swamps of Svartalfheim, the overgrown forests of Vanaheim, or the majestic plains of Asgard, each level is full of loot just waiting to be found. Going out of your way to search for a seemingly impossible to reach treasure chest is almost always worth it, as you’ll find hacksilver (money), upgrade materials, gear, and more along the way.

Regardless of the era, God of War games have always featured outstanding visuals. The previous title on PS4 is still one of the best looking games even on the best gaming PCs and the Steam Deck. It’s no surprise that God of War Ragnarök is another visual stunner.

I played the game on PS5 and was impressed with the amount of detail poured into each environment and character. There were several times where I stopped just to take in the beautiful and impressive scenery. Photo mode won’t be ready at launch, which is disappointing, but I can already see people posting their best shots on social media when the feature releases.

Composer Bear McCreary delivers another catchy soundtrack that enhances the game’s epic reach. The sound design is both subtle and direct, depending on the moment. I encourage everyone to play while wearing one of the best gaming headsets.

There is much more to discuss about God of War Ragnarök. But suffice it to say that Santa Monica Studio has gone out of its way to create a truly memorable experience that should satisfy a large portion of the gaming community.

While the game’s many hidden loading screens remind players that this is a PS4 title, that’s not enough to ruin what is an otherwise exceptional work of art. God of War Ragnarök has certainly earned a spot on our best PS5 games list.

In short, get God of War Ragnarök. It is a title worthy of the gods.