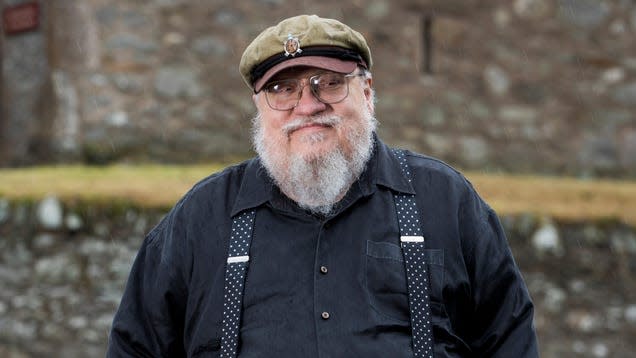 Welcome to what is now becoming a recurring feature here at Kotaku.com, where we report on the times acclaimed author George RR Martin chose to write about gaming. Ring of Elden on his very old and very picturesque personal blog.

The last time Martin went to his blog to talk about the game, with which he had a mysteriously brief and vague involvement, he said it looked “amazing”. This time? It is addressing the weird, and frankly not-in fact– rumors all over the internet that he somehow hid his name initials in the game, like it was something someone could actually do:

… there’s a weird story all over the internet about how I “hid” my initials in ELDEN RING because… ah… some of the characters have names starting with R, or G , or M. To which I say, “Hey? What? Really?” This was news to me. I’ve been writing and publishing stories since 1971, and I suspect I’ve been giving character names starting with R and G and M from the start. With the other twenty-three letters of the alphabet, it’s hard to come up with names, especially since A SONG OF ICE & FIRE uses so many of them, and I like to give family members and to relatives of names that have something in common… but really, why should I hide my name in-game? My name is right there ON the game, as one of the creators. Hey, ELDEN RING is pretty exciting, no need to make stuff up.

Interesting. George, now that you’ve publicly stated that you don’t need to hide your initials in character names, what do you have to say about hiding your feelings about turtles? in the Turtle Pope?