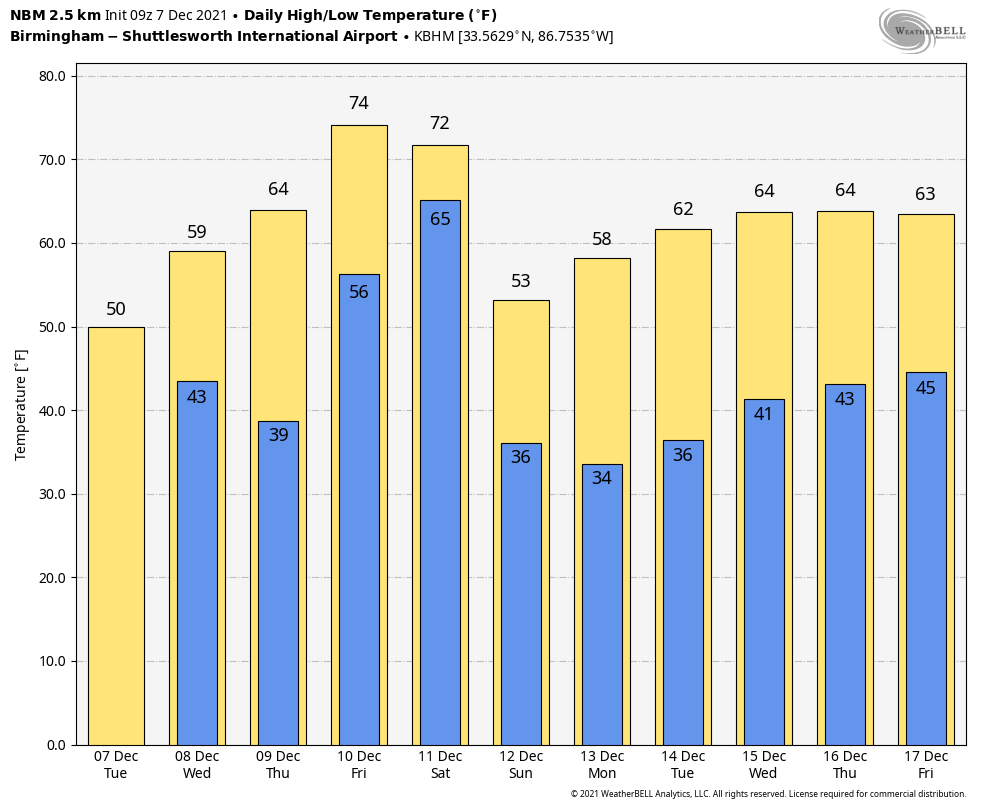 ON THE MAPS: A cold front is stranded over southeast Alabama early this morning; south of the front, Dothan reports 60 degrees, but most communities in the northern half of the state are in their 1930s and a few places are frozen over. Today it will be mostly cloudy and cool with a high of 48 to 52 degrees for northern and central Alabama… the average high for Birmingham on December 7th is 59. Some showers are possible today on southern Alabama near the Blocked Front.

A low wave will move along the front tonight and showers are possible statewide after midnight and until tomorrow morning. Then there’s a good chance we’ll see some sun tomorrow afternoon as the wave moves east of the state. The top tomorrow. will be in the low 60s over northern Alabama and closer to the 70s over the southern third of the state.

Thursday will be a warmer day with a mix of sun and cloud… maximum will be in the upper 60s and all showers during the day should be widely spaced. Then, on Friday, temperatures will rise until the mid-1970s, very close to record levels. Birmingham’s record for December 10 is 79 set in 2007. Scattered showers and storms are possible on Friday, but it won’t rain all day.

ALABAMA WEEKEND: A cold front will result in a rainy event staged in the state from Saturday to Saturday evening. It’s still a little early to be really specific on the timing (lots of outdoor events are scheduled, like the Christmas parades), but the wide window for the rain will come from 6am to midnight. Rain can be heavy at times, and with an unstable air mass, the door is open to severe thunderstorms. So far, the threat of severe weather does not appear to be particularly high; it could very well be an event like the one we experienced yesterday. SPC has not forecast an area of ​​severe storms on Saturday at this point.

NEXT WEEK: An upper ridge will form over the Gulf Coast region, and at this point the week is shaping up to be rainless with pleasant days and cool nights. Monday’s high will be in the upper 50s, followed by the 60s for the remainder of the week. And, we should note that the long forecast suggests above-average temperatures for much of the eastern half of the United States from December 14 to 20. See the Weather Xtreme video for maps, graphics and more details.

AT THIS DATE OF 1951: It was the hottest December day on record for most of Alabama. Montgomery climbed to 83 degrees. The other peaks included 80 in Birmingham and Anniston, 79 in Tuscaloosa and 78 in Huntsville.

AT THIS DATE IN 2006: A rare tornado ravaged Kensal Rise in London. This T4 on the TORRO scale, equivalent to an EF2 on the Fujita scale, injured six people and damaged 150 houses. According to the BBC, the last tornado to cause significant damage to London was in December 1954 in West London.

BRAIN WEATHER: Remember you can listen to our weekly 90 minute show anytime on your favorite podcast app. It’s the weather show with many familiar voices, including our meteorologists here on ABC 33/40.

CONNECT: You can find me on all major social networks …

Look for the next Weather Xtreme video here before 3:00 PM this afternoon… enjoy the day!