Welcome to another edition of Blog Wheel. Every week I start this blog in exactly the same way. I should probably try to think of a more creative intro.

Instead of talking about my least favorite ideas, I wanted to touch on a few topics that some people on Twitter submit to me every week. They are not necessarily good or bad, but they are always exactly the same. I appreciate the dedication. Twitter user @FreddyFloater is dedicated to asking me and anyone on the internet if a worm can trip.

The answer is no. You cannot trip if you are already on the ground and have no legs. Perhaps a very small pebble could cause the worm to deviate slightly from its path, but to stumble you have to fall to the ground, and the worms are already anchored. The only thing I know about worms is that you can rip a worm in half and turn it into 2 worms. Which begs the question, if you could cut yourself in half and make 2 of you, would you? It would be extremely painful and it would take about 5 years for each half of your body to regenerate into 2 full people, but in the end you would have a clone. I think I would. I would like to have a clone. We could make good content together.

@TheRealLifeFrog started threatening me until I came up with peanut butter brands as a topic. 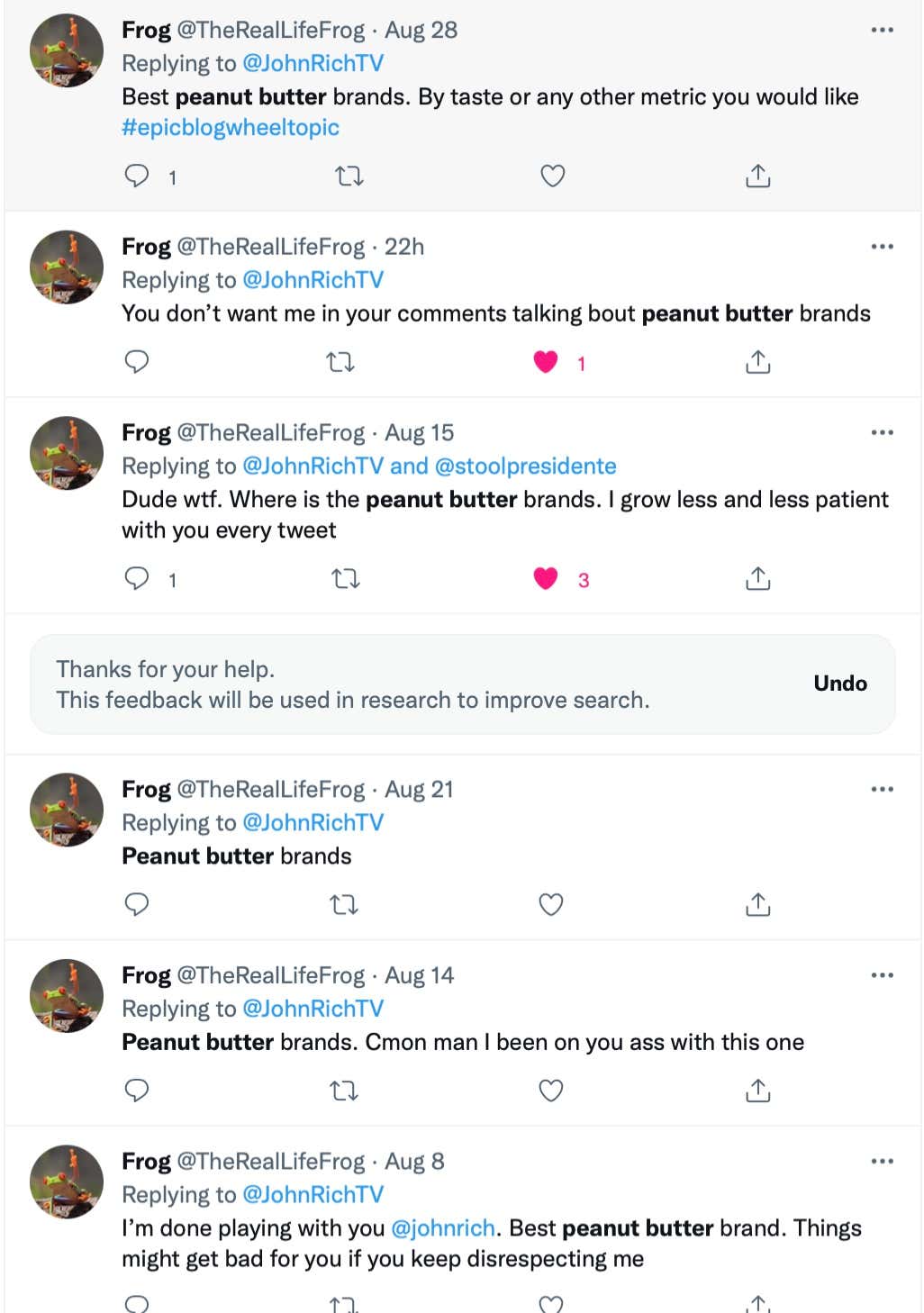 I’m not sure what I’m supposed to do with the peanut butter brands. I don’t have much experience with peanut butter. I know I don’t like peanut butter chunks. The creamy JIF is the best option. Except earlier this year when JIF had a major recall because a bunch of their jars got contaminated with salmonella. I ignored the recall warning and used it on a peanut butter and jelly sandwich. It gave me a stomach ache for a whole day. All of the JIF was pulled from the shelves of my local grocery store and I had to buy Peter Pan brand peanut butter. The Peter Pan was significantly worse. There’s also a brand called Skippy that I’ve never had, and Smuckers makes this jar of peanut butter and jelly that looks gross. That’s all I have on peanut butter.

Lastly, @DannyPorch really wants to know which hats I think are the coolest. 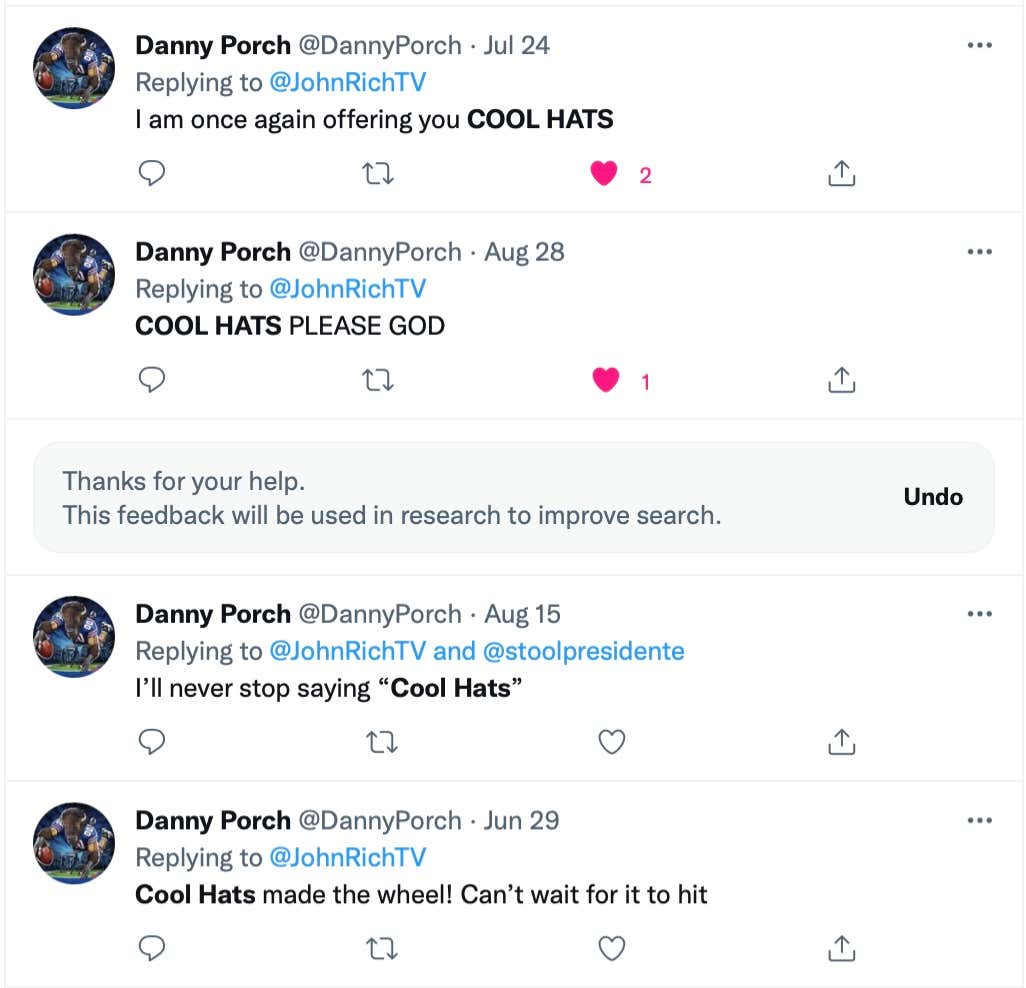 I quite like this one. There are a lot of cool hats. Too bad the wheel isn’t on it yet. I’ll put it back on the wheel and see what happens. Here are the topics that made it this week.

What I Would Do If I Hosted Blue’s Clues

King of the Southern Line of Succession

Can a worm stumble? (I forgot I put that on there. Spoiler alert: it doesn’t land on it)

What does DJ Khaled actually do?

Here is the spin:

What a surprise! This week’s winning topic is Reasons to Live! I don’t know why I’m acting like this is some kind of big reveal in the blog. I announce the winner on Twitter every Monday morning. I also put the winning topic in the title of each blog. This is not at all a surprise.

Lou Gehrig once said, “Life is good” and I think about that quote every day.

“But what does that mean, John?” – That’s an excellent question. To me, that means life is worth living.

I could get really deep and introspective with that, except it’s not something I’ve ever done. I have no desire to do that. I will, however, share with you a handful of different things that make me appreciate how good life is.

Laughter is the purest form of human expression. There’s nothing that makes me laugh more than a good comedy show. I’ve always been a huge stand-up fan.

You’re never too old to take up golf. It’s the perfect way to spend the hottest part of the day in the sun. For the most part you won’t enjoy playing, but there will be 3-4 very short moments during your playthrough where you’re a bit happy with how things are going.

Every man in the world wishes he could grow the perfect mustache. Unfortunately, I can’t grow one myself. Believe me, I tried for years. But that doesn’t mean I can’t appreciate a good mustache when I see it. There’s nothing I like to see more than a thick black mustache that looks like it’s painted on someone’s face.

I have the utmost respect for any man who has ever donned a shiny suit 4 sizes too big. It makes me smile every time. Are you about to steal a bunch of energy drinks from a gas station? Have you recently lost 150 pounds? No matter the reason, seeing a giant, shiny costume always improves my mood.

Game shows are one of my 2 favorite types of television. Any avid game show fan will tell you that the most important part of any game show is the host. The game itself is almost an afterthought. People are not listening to the competition. They tune in to watch the one person in charge of the show crack as many jokes as possible in 30 minutes. A good game show host can bring down the house using only facial expressions.

My other favorite type of TV in Court TV. Kids of the 90s will remember staying home from school and watching Judge Judy all day. It was always the best part of being sick. Court TV is even better now than it was then. There are so many new shows, judges, cases, etc. There is enough Court TV on demand to keep you entertained from morning to night.

Reading is so underrated. Most people stop reading books once they finish school, but there are actually a lot of entertaining books out there for adults. You can buy paper books at a library or bookstore. You can buy them electronically on a Kindle or as an audiobook. There are 3 types of books: fiction, non-fiction and coloring. I prefer non-fiction, because I like a book that educates me. When I’m done reading, I want to feel like I’ve learned something. Learning by reading broadens your horizons and makes you a better person.