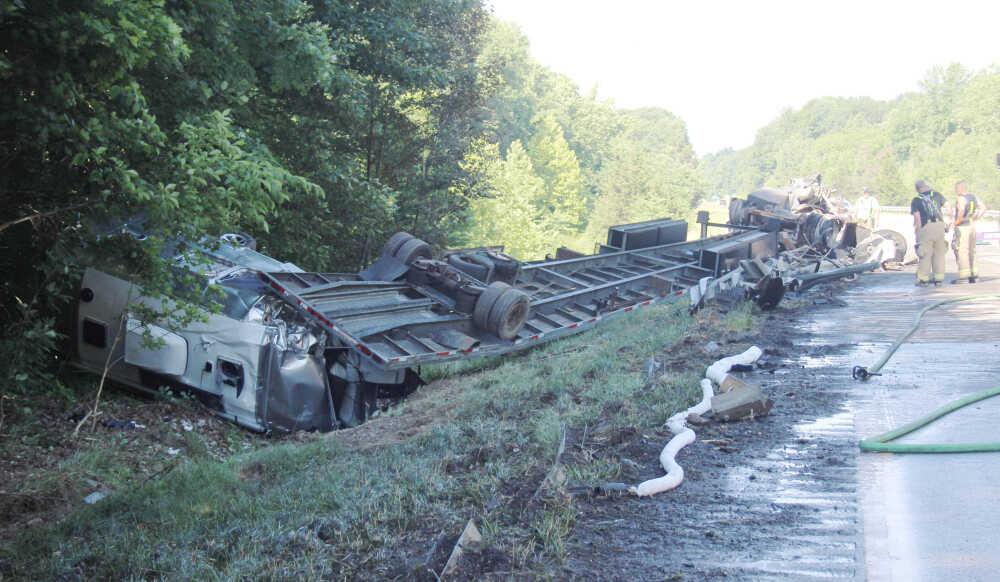 The scene of a semi-fatal incident on Interstate 70 that I covered in July. The driver perished in a fire that resulted from the accident. (Banner Graphic/SELVIA BRAND)

Featured in the 2022 edition of Banner Graphic’s Salute to Putnam County’s First Responders.

I sometimes think back to the fatal two-vehicle collision that happened on State Road 42 last year. It is still difficult to reconcile, both as a journalist and as a “civilian”.

I remember how the place would have been without the cicadas. How I thought, “What was that?” on my way home to Greencastle, just for lunch.

In a word, it was surreal.

I was just getting my information from Sheriff Scott Stockton and writing the article. I wanted to treat her like another wreck, albeit decidedly more serious.

Then I later saw the Putnam County Sheriff’s Office Facebook post of a photo I had taken of the Corporal. Scott Ducker, wondering how, maybe why, he had to tell his family that their loved ones were dead. I cracked up before finally going to bed.

For me, “42” was a powerful junction with the first responders that were there. As tragic as it was, this experience confirmed that even though we all had jobs to do, we were still people.

I have personally gone to see three more dead since. There’s the one that happened at the railway bridge northeast of Greencastle just over a year ago. Then the double death near Fincastle in May and the semi-fire on Interstate 70 in July.

I hope this isn’t seen as dismissive, but covering fatal incidents has kind of become business as usual. A few of our fire, police, and EMS personnel could support me on this to some extent.

I think it has to do with me and the firefighters being impatient for a burn to happen. We don’t want that to happen, but we hate going without a voucher. It’s part of the philosophy, of the commitment, of what we do.

You might characterize this, however, as having a morbid curiosity. But when it comes to wrecks and fires, I chase fire engines, so to speak. In other words, I think there’s an honest thrill to being in the thick of it.

More to this curiosity, I remember a firefighter from Greencastle telling me that if he could help him, I would never see a burnt body. But I did when I did this semi-fire.

As I told one of the gendarmes working at the scene, I wanted to confirm this for myself. I also didn’t have my camera as the deceased was removed from the wreckage. I have more integrity than that as a journalist.

It was a distinct feeling that I had in my stomach. It was a mixture of unease and, perhaps, that morbid curiosity to see something like this for the first time.

However, I was not bothered by the state of the individual as he was. As I left and drove on I-70, through Brazil and back to Greencastle, I just had my playlist going.

Ooh, loneliness will blind you/Between bad and good/Coming right behind you/I swear I’ll find you one of these nights

You gotta slow down, sweet talking woman / You got me running, you got me looking

What happened was just that.

I acted on my due diligence, on my desire to be there and report back. I remained objective, but always aware of this intuition. It is a prerogative that I do not take for granted.

The emotional toll our first responders face from such incidents has never escaped me. And this should not just be acknowledged, but rather shared in good faith.

I took the aftermath of 42 years to process what I saw and, naturally, I posted a blog post about it. I was otherwise open with some about how I felt. I quickly discovered that the raw sadness I felt was valid.

No matter your position or your goal, I think it takes courage to listen to someone. Being extremely shy, I didn’t in various circumstances.

However, for a person’s reactions to such things to have meaning, I think it needs to be talked about honestly. I hope all of our first responders will absolutely support me on this.

One mannerism I’ve seen with them is that sometimes it’s okay to smile, and even laugh, through it all. They have their own idiosyncratic sense of humor. I guess I’m still trying to find mine.

We can never forget our fundamental humanity, but this is how we do not lose sight of what we are called to do for the community. What amounts to saying is that we come back to it right away.