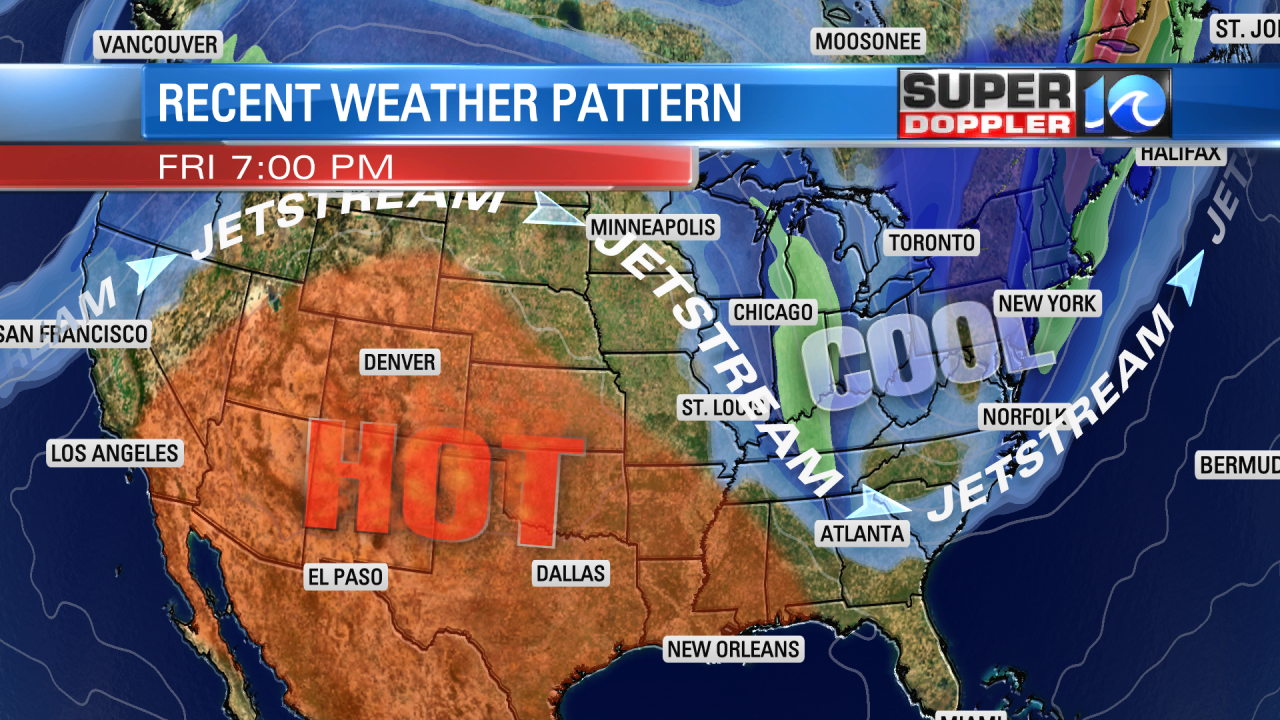 We are like zombies…sort of. The weather has been pretty much the same every day lately with lots of heat, humidity and a few scattered thunderstorms in the afternoon. We are in the beautiful days of summer. So people are pretty used to it. However….Prepare for a big change in the weather pattern this week! We will talk about seasonal cool and dry air.

I don’t want to go too far. We still have about 3 days left of this heat. Today’s high temperatures are aimed at the low-mid 90s. The heat index will be close to 100.

High pressure is offshore with a cold front moving very slowly over the Midwest.

We will be partly cloudy this afternoon with a few showers and isolated thunderstorms. There will be a light southwesterly wind.

Tomorrow we will have similar weather, but the high temperatures will probably increase a little. So we’re going to run more in the mid-90s.

The heat index will be between 99 and 105 degrees. It is possible that heat advisories will be posted, but we will see.

By Wednesday, 2 cold fronts will approach from the northwest. We will not cool yet as the fronts will still be to our northwest during the day. However, at the end of the day, we will have some scattered showers and thunderstorms. The high temperature will be in the 90s and the heat indices will be in the 100s.

Finally, things will change by Thursday. We will have lots of clouds with a good chance of rain. High temperatures will drop to the upper mid-80s. Humidity will drop on Thursday, but it won’t reach low levels until next weekend.

High temperatures could be near 80 degrees for a few days next weekend. It will feel like a taste of early fall. I’m sure we’ll warm up again after the brief break. The weather pattern will definitely change next weekend as the jetstream plunges sharply over the east coast.

Speaking of ch… ch… ch… Changes. Things may be starting to heat up in the tropics. There is a weak disturbance in the Eastern Atlantic. It is near the Cape Verde Islands. It is moving west/northwest.

There is quite warm sea water. However, there is not much deep ocean heat content along its forecast track.

Also, there has been quite a large layer of Saharan air off Africa lately. This is a dry/dusty air mass that tends to suppress the formation of the tropical system.

We’ll be tracking this feature over the next few days, whatever it does, and bringing you updates.