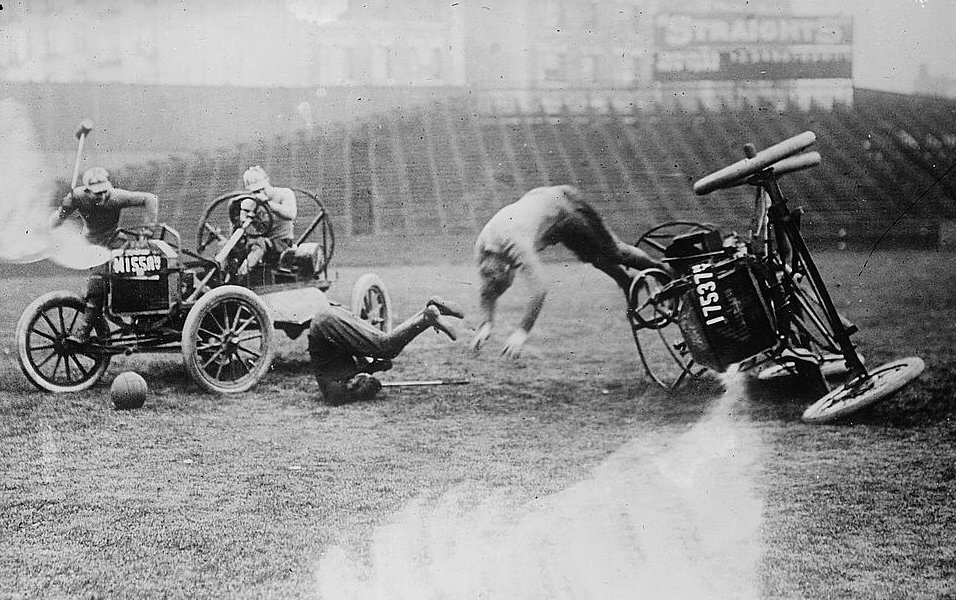 When I was a kid, my siblings and I loved the demolition derbies held at Arena Park. Papa would take us; Mom spent a quiet evening away from four noisy children.

I wonder if the people who attended the auto-polo demonstrations at Capaha Park during the 1922 fair enjoyed the shows, which I imagine looked a bit like the demonstration derbies we were cheering on.

For those curious, like me, the SEMO District Fair introduced demolition derbies to its entertainment lineup on Sunday evening, September 19, 1971. Despite a threat of rain, 1,432 people attended that first derby.

While the article published in The Daily Republican the day after the first auto-polo demonstrations don’t give attendance, it does provide an interesting explanation of the sport.

‘PLAY TO WIN!’ IS THE AUTOPOLIST SLOGAN

“Play to win, regardless of the other’s injury,” is the auto-polo slogan, according to AR Patterson, manager of the two auto-polo teams that now give exhibits at the county fair that was held here this week.

Spectators were shocked to witness the first match between the auto polo teams on Wednesday when the driver of one car allegedly rammed the other car with the intention of overturning it, a performance that was repeated several times during the show. It was the direct intention of the driver to do this in order to prevent the other side from making a run which involves driving the ball between two pairing stakes arranged at either end of the course, Mr Patterson said.

This “heckle” feature, which provides so much thrill to the audience, very often leads to serious accidents for players and drivers to the point of breaking their arms and legs and, in rare cases, almost crushing the one of them to death. However, Patterson says he doesn’t recall a death resulting from the game.

Due to the frequent need for a medic, each group of players has a medic and nurse in their gear, which are sometimes needed when a player has been badly injured. Traveling with the playing teams, Dr. OH McDonald of London, Indiana, and Mrs. Clara B. Tucker, a qualified nurse. The doctor also acts as a medical advisor to the members.

A strong rivalry exists between the two teams that play here due to their entry into the Auto Polo League, Patterson says. Eight teams make up the league, the rules of which are that the team with the most points has the honor of placing its pilot at the head of a set of teams that compete the following year, while the player advanced to a pilot position. Representatives from the Hoosier Auto Polo Club, who won Game 1 Wednesday afternoon against the Golden Gate team, 2-1, are driven by JH Portieus and player E. Tolen of Indianapolis, Indiana. The Golden Gate driver and player are FB Tucker and AH Smith of Los Angeles, California.

A knockdown during a game in Hilltop Park, New York, in a photograph by the Bain News Service. (Wikipedia.com)

The rules for the players state that they must stay on the machine and while obeying this rule they may adopt any means to get the ball to their goal other than picking it up and passing it.

Each car is made as light as possible with heavy reinforcements on the bonnet and rear. A large curved iron bar is attached to the back of the driver’s seat to protect the steering gear when the car is overturned. The whole construction speaks of lightness to the highest degree. Smooth tread, 30X3 tires are used on all cars for their skid qualities, which allow an experienced driver to turn their car in an instant by swerving it at full speed, allowing the rear to skid while the front occasionally acts as a pivot. This action is necessary when a player misses the ball and wants to come back afterwards. The engines used in the cars are 1912, ’13, ’14 and ’15 Ford models. Mr Patterson says auto-polo players want older motors because they will stay cooler during hard runs and be more responsive. A car in the polo chain here has been flipped 313 times in various contests.

The ball used is the shape and size of a basketball, although slightly heavier. The mallets are made of wood and cut short to suit the position of the player, who squats on the running board of the car.