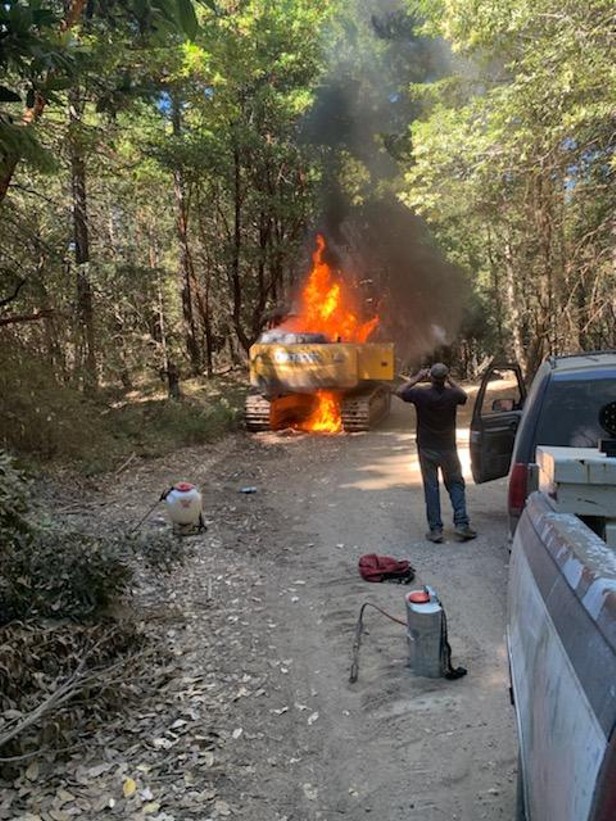 CalFire has launched an arson investigation after an excavator caught fire on California State Park property near Honeydew yesterday afternoon.

A witness reportedly saw two people near the John Deere excavator shortly before the flames ignited in the grease and oil in the machine’s undercarriage, allegedly from a flare launched below .

No suspects have been identified in the case, although a group of people calling themselves “forest defenders” were parked at the entrance to the site just off Mattole Road before the fire. The area to be mined – known as Rainbow Ridge – has been at the center of protests for the past five years. A timber harvest plan submitted by the Humboldt Redwood Co. last year calls for a selective harvest of 1 to 3 million board feet of Douglas fir.

According to HRC spokesman John Andersen, the excavator belonged to a team of private contractors who were building roads to the logging site. HRC has an easement through state park land to its property on Rainbow Ridge and the contractor, Shinn Construction, has removed trees to build a road.

“We had people protesting,” Andersen said. “Yesterday, one of them apparently put a flare inside an excavator which caused it to catch fire. Fortunately, it did not spread to the surrounding forests. We are trying to get the person responsible. They are considering arson. We are working with the authorities to try to apprehend the person who is causing these security concerns in the area.

Bob Shinn, who visited the excavator yesterday afternoon shortly before it caught fire, said the flare was placed under, not inside, the excavator, which belongs to his son Wesley Shinn. According to Shinn, the fire was already burning too hot to put out with the equipment he had on hand. The Redcrest Volunteer Fire Department, Honeydew Volunteer Fire Co. and CalFire all responded to the scene. CalFire used tank helicopters to douse the area with water and flame retardant. Unfortunately, according to Shinn and a statement from CalFire, the excavator’s fuel system was compromised and released approximately 80 gallons of diesel onto the ground. Manual crews and heavy equipment were used to cradle the ground to prevent fuel from spilling, but site remediation will be required.

“I rode on one hell of a fire,” Shinn said. “It was toxic. Luckily it was on the side of the road and didn’t spread to the woods. If we ever catch (a fire) here these days it’s going to be bad.

“It’s a piece of shit,” Shinn added, saying he was upset that his son’s gear was destroyed.

CalFire Battalion Chief Jeremy Ward said the blaze was limited to shovels, with nearby trees burned and fallen leaves on the ground.

“Flame retardant from an air tanker and water from firefighting helicopters helped contain the fire until ground resources arrived to extinguish the shovel,” Ward said.

The incident is being investigated as an arson by CalFire, although a spokesperson declined to say whether a flare was used to start the blaze.

No group or individual has taken responsibility for the incident, although two threatening notes were found at the scene and later provided to the Log. One, who was reportedly found taped to the door, said: ‘Watch out for spiked boards and tree spikes.’ Andersen said trees would be examined for spikes, which are bits of metal embedded in trees that can cause chainsaws to jam and kick back at operators; they will also damage industrial mills when processing trees.

Lost Coast League member and first logging protester Jane Lapiner said she was unaware of the fire when contacted for comment this morning. Lapiner was one of four 70-year-old protesters detained in 2019 by Lear Asset Management, HRC’s private security firm. The group later had their trespassing charges dismissed.

“It’s unlike anyone I know,” Lapiner said. “All the young people I know who consider themselves defenders of the forest are 100% non-violent.”

Lapiner wondered if the action could have been taken by a “provocateur” unaffiliated with the peaceful protesters.

The Journal also received a photo of a group of young people, about ten in total, sitting in the trees. Shinn says a few dozen people were protesting as he walked through the gates yesterday afternoon, and a day earlier the crew had found the roads blocked with debris. An arborist has been stationed there in an old fir tree for several days. The sitter appears to be affiliated with a group calling themselves Treesitters Union 707. The group has an Instagram account but no official spokesperson. The Instagram account features video taken from the tree of fatigued Lear employees blasting the Tory talk radio from a Humvee, and guard dogs chained under the tree, apparently to prevent protesters from bringing in additional supplies to the guardian. Another video, posted on Saturday, shows downed trees near the keeper, “to better isolate the tree keeper and prevent the resupply of food and water”.

“Lear Assets Management mercenaries have been taking turns preventing the approach to the tree 24/7 for the past week,” the message read.

This fits with Shinn’s account, who says he asked for help to protect his equipment, but Lear told him that his crew’s efforts were focused on the Guardian.

“She’s still up in a tree but she must be thirsty,” Shinn said, adding that protesters fled after the fire. “There is not a soul here.”

A message and email have been sent to the Treesitters Local 707 group. We will update if we receive a response.