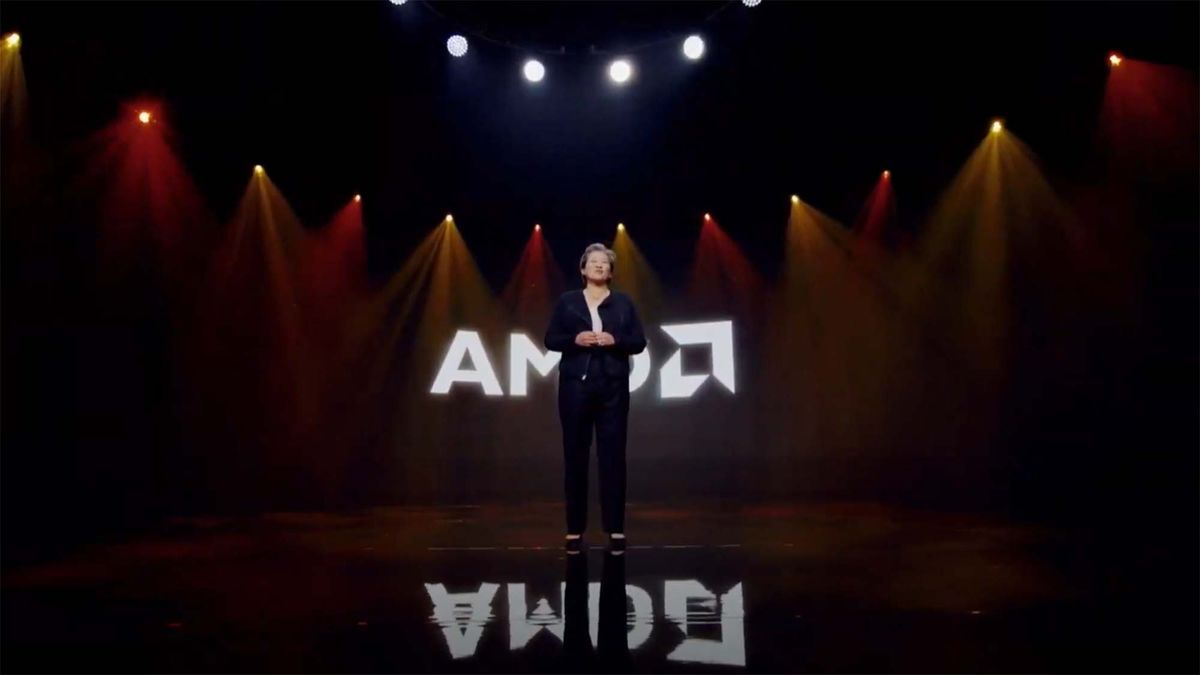 Looks like it’s all for show! Tons of information shared with us today, thanks for joining us!

A recap: the RX 7900 XTX and RX 7900 XT were announced today and got a breakdown of some of the specs. They will include a new cache memory chip, a new graphics computing chip and 165% more transistors per mm2. No mention of the other 7000-series chips, which is a shame considering we don’t have budget options for AMD’s next-gen.

They also have Display Port 2.1, which will offer a significantly improved refresh rate for 4K and 8K gaming, up to 480 Hz for the former and up to 165 for the latter. Several PC games and Unreal Engine 5 will partner with AMD to take advantage of these and other upgrades.

Many updates and toolkits are coming to AMD’s Software Adrenaline 2.23 release for content creators. And finally, the XTX and XT will be released on December 13 this year for $999 and $899, respectively.

The software is getting an update called AMD Hypr-RX Mode, which lets you boost frame rates and lower latency, and will be released in early 2023.

AMD Software Adrenaline Edition is the talk now, which is basically a gaming hub for stats and settings. You can also stream games from it and make it a hub to connect other devices.

It will be interesting to see what happens to this partnership with AMD and Unreal Engine 5, but so far it looks very promising.

Apex Legends will be playable at 300FPS, which is ridiculous. Assassin’s Creed Valhalla can be played at 96FPS at 8K. Halo Infinite will also support high performance Ray Tracing.

We also find out that you don’t need to upgrade your PC or power adapter for these new chips, just remove the old one and insert the new one. Pretty handy stuff.

I wonder if any of the other rumored RDNA 3 chips will be revealed during this livestream. It would be nice to have more affordable GPU options. And just to clarify, it’s the RX 7900 XTX and RX 7900 XT that have been revealed.

As a reminder, the RDNA 3 is the first gaming chiplet. It has 61 Tflops of calculation, 5.3 TB/s and 58 billion transistors.

They just announced two of the chips: the rumored flagship Radeon XTX and the Radeon XT. Now they detail some of the more specific specs of each chip.

It starts! And we have Dr. Lisa Su, President and CEO of AMD, speaking as usual for these presentations. Just an introduction for now, detailing the products they’ve released so far as well as what they plan to release in the future.

This presentation is focused on gaming architecture, namely chips powered by RDNA 3.

Hi there! This is Allisa James, IT Writer in the US, and I’ll take over for the live blog. I can’t wait to see what AMD has in store for us in about 10 minutes or so.

Well that’s it for me. I’m handing over to our US team now, but I’ll be watching with everyone else to see what Nvidia has in store for us in just under an hour, and I really hope it’s an exciting day for gamers everywhere. Take care all of you!

We really hope AMD introduces more affordable cards today as well. While we weren’t expecting to see an RX 7700 XT or RX 7600 XT today, these are still some of the most anticipated GPUs on our list as we would really like to see more affordable graphics cards like the Intel Arc A770 .

We haven’t been able to test this GPU ourselves yet, but by all accounts it appears to be a solid graphics card and not worth much money. We’re in the midst of an ongoing cost of living crisis, so any price advantage AMD can bring to the table would be welcomed by many PC gamers.

Nvidia has been the market leader in graphics cards since the very beginning, and AMD, while competitive, has always held second place. With Nvidia’s recent issues, including reports of melting AC adapter cables, AMD was keen to point out that it’s sticking to the standard 8-pin connectors that most power supplies already have.

Power consumption is also a concern, with Nvidia’s RTX 4090 taking in almost half a kW. As we have seen with the AMD Ryzen 7000 series chips, AMD has made strides in the area of ​​power efficiency which we find very encouraging. Hopefully the new Radeon GPUs continue this trend.

Given all the power issues we’ve seen in the UK and elsewhere, I think AMD’s focus on power consumption is a laudable approach and could be a big plus in its fight against Nvidia and Intel.

If you want the excitement to continue, check out our list of today’s best AMD graphics cards.

At the moment, the Radeon RX 6800 is our pick as AMD’s best overall GPU. Will the GPUs AMD is introducing today knock it out of the top spot? We certainly hope so.

The name of the event is “together we move forward_gaming”, so we expect to hear a lot about how these GPUs bring performance improvements and cool features to the latest PC games.

This is the latest in a series of events hosted by AMD, and a week later AMD will host a slightly less exciting event on November 10: “Together We Move Forward_Data Centers.”

Well, our friends at TechRadar Pro will be delighted, either way.

Join us on November 10 at 10 a.m. Pacific for “Together we advance_data centers,” a live-streamed premiere to unveil the next generation of AMD server processors. #AMD #TogetherWeAdvance #data centersNovember 1, 2022

It’s almost time! Join us today at 4pm ET as we unveil the next generation of Radeon™ graphics.📺: https://t.co/NRw6EMcX5h pic.twitter.com/clZZiMm3IiNovember 3, 2022

We’re still hours away from the start of the event, but we’re excited. Nvidia has been the top GPU dog for so long now, that we really want to see AMD release a line of new GPUs that really putting pressure on Team Green. After all, healthy competition helps drive innovation, which means we PC gamers win.