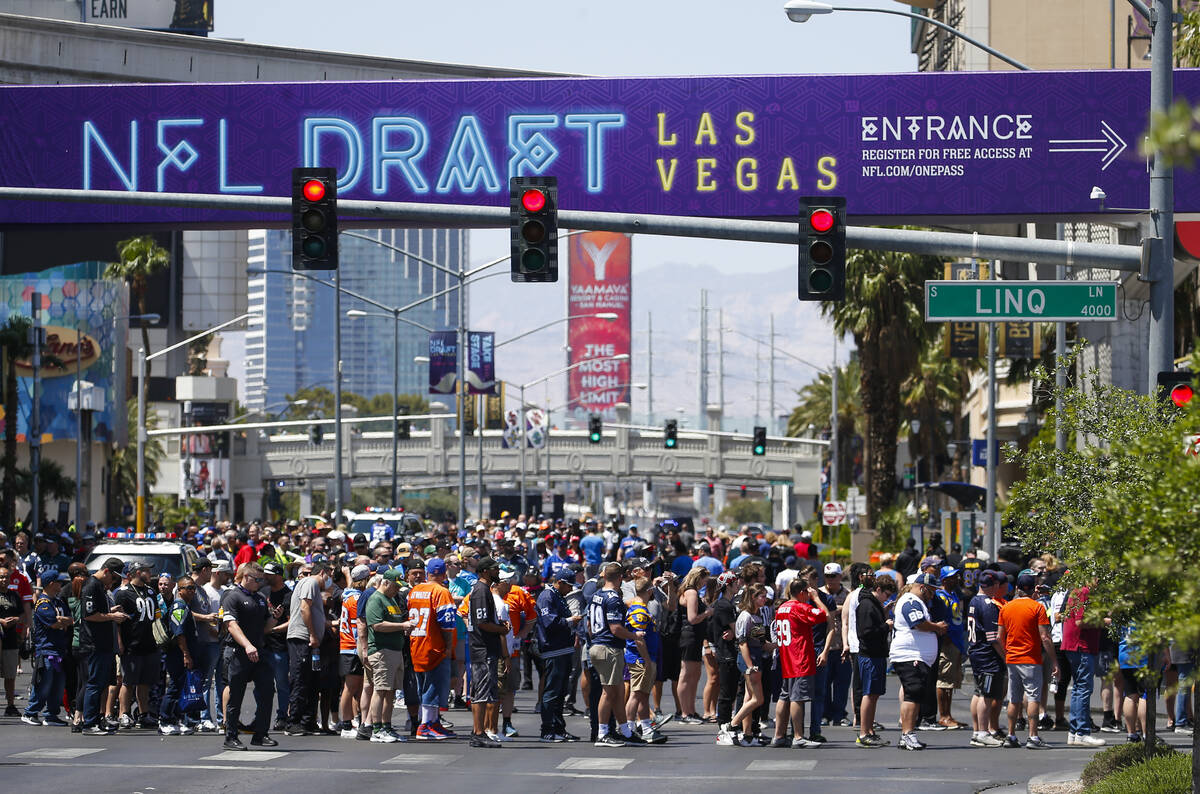 The area features an interactive theme park, NFL player appearances, food and beverage options, and specialty retail items available only in Las Vegas for the Draft.

The Fan Experience is located next to the Theater Project, which is behind the Linq Hotel.

Part of the Strip closed for a press conference

In what might be one of the most unique press conferences in Las Vegas history, officials kicked off the NFL Draft festivities Thursday from a stage at the intersection of Las Vegas Boulevard and Flamingo Road.

“Doing this isn’t easy,” said Steve Hill, president of the Las Vegas Convention and Visitors Authority. “This is the first time we’ve closed Las Vegas Boulevard for a press conference.”

During the event, Las Vegas Boulevard between Flamingo and Bellagio Drive was renamed Draft Drive for the three-day event.

Gov. Steve Sisolak said it was a surreal day for Las Vegas, especially with the city’s experience with the league in the past.

“I remember when Las Vegas couldn’t run commercials during the Super Bowl,” Sisolak said. “Now we have the draft, we had the Pro Bowl here and the Super Bowl. It’s just amazing.

NFL commissioner Roger Goodell said he was relieved to finally be in Las Vegas after the 2020 draft was postponed due to the COVID-19 pandemic.

“It’s exciting to think back to two years ago when we were supposed to be here for the 2020 NFL Draft and I got diverted to my basement,” Goodell said.

Goodell looks forward to a long-standing relationship with the city and great events ahead.

“Think about it, we just had the Pro Bowl here… now you have the draft here and Super Bowl 58 is coming here in just two years,” Goodell said. “Three of our biggest tentpole events are in Las Vegas over a five-year period. I think that says a lot about the commitment of the Raiders, the NFL, or Las Vegas…about what we can all do together.

The National Weather Service issued a strong wind advisory for Las Vegas with wind speeds between 30 and 45 mph possible Thursday, but the NFL show will continue, even if it’s windy.

One of the first fans walking down Las Vegas Boulevard in front of the Bellagio was hard to miss.

(The team formerly known as the Redskins changed its name to Washington Commanders.)

“First of all I have the Redskin shoes, I had to go with the bow tie, a regular tie moves too much in the wind,” Friton said. “I have my grandfather here (on the championship belt), he was in the Washington Redskins marching band. Yeah, I’m a lifelong Redskins fan.

“I’m awkward, it didn’t take me long to come up with the concept,” Friton said. “The jacket I’ve had for years. It was my Thanksgiving jacket.

Friton arrived in Las Vegas on Tuesday to take in the scenery before the draft kicks off.

He appreciated that part of the Strip was closed. “It’s a lot easier to get around,” Friton said.

After a two-year delay, the NFL Draft finally kicks off in Las Vegas.

The three-day event begins Thursday with the opening of the NFL Draft Experience at noon.

The official draft activity will begin at 1:45 p.m. on the very famous red carpet stage above the fountains of the Bellagio. There, the top prospects from this year’s draft will take to the stage, making the rounds of the media, before being transported to the draft area behind the Linq.

The draft is expected to draw around 200,000 entrants per day, setting the stage for what could be the biggest event in Las Vegas history. The Strip across from Bellagio Drive at Flamingo Road is closed to vehicular traffic, as is Flamingo from Las Vegas Boulevard to Koval Lane, to allow fans to enjoy the draft experience at both activity centers safely and transparently.

If previous drafts are any indicator, many fans will be decked out in outlandish costumes representing their favorite team. The draft has become known as the league’s premier fan event since it began taking it on the road in 2015.

The NFL had planned to hold the draft in Las Vegas in 2020, but was forced to make it a virtual event due to the COVID-19 pandemic.